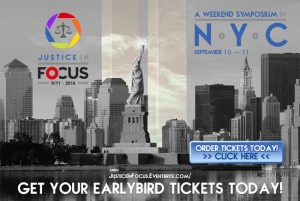 AE911Truth, the Lawyers Committee for 9/11 Inquiry, and other co-sponsors are hosting what promises to be a landmark symposium on the pursuit of 9/11 Justice fifteen years after the fateful events of September 11, 2001.

Hundreds of researchers and activists will come together in the historic Great Hall of Cooper Union in NYC on September 10th and 11th. Together, we will discuss the state of ongoing efforts to expose the truth and obtain justice for the attacks that killed nearly 3,000 innocent victims and that continue to serve as the pretext for the Global War on Terrorism.

The conference will feature keynote addresses made by respected legal figures, panel discussions on the role of the Deep State and on the significance of the recently declassified 28 Pages, presentations by movement leaders and researchers, and daylong evidentiary hearings, conducted by a panel of esteemed lawyers, on the World Trade Center’s destruction.

Speakers and panel discussions will include: