Electoral College must reject Trump unless he sells his business, top lawyers for Bush and Obama say

Ethics lawyers for the last two presidents are in agreement.

In an email to ThinkProgress, Eisen explained that “the founders did not want any foreign payments to the president. Period.” This principle is enshrined in Article 1, Section 9 of the Constitution, which bars office holders from accepting “any present, emolument, office, or title, of any kind whatever, from any king, prince, or foreign state.”

ROBERT STEELE: Gotcha! If there is one thing the neo-cons and their puppet political family the Bushes can agree on with the neo-liberals and their puppet political families the Clintons-Obamas, it is that Donald Trump represents an enema that the Republic desperately needs — but such an enema would “drain the swamp” and flush the shits that now commit daily treason with impunity, favoring the 1% over the 99%. Despite the fact that Hillary Clinton is without question indictable for enabling pedophilia, electoral fraud, treason, and charity fraud (my letter to James Comey is below), she knew of this barrier and had plans to limit or even close the Clinton Foundation so as to be nominally impervious to criticism (her off-shore accounts would of course continue to receive money from the Saudis and others). Trump has been nominally check-mated in this instance but this is easily resolved if he sells — or gives — his business to his trusted family members — there is no tangible bar to a business owned by others, including his sons and daughters — receiving funds from foreign governments, or Hillary Clinton as Secretary of State would have been in jail — if not hanged for treason — long ago.

What Trump is not getting is that he has from now to 19 December to not only sell his business, but to introduce to the public in detail the twelve ways in which the system is rigged, and commit to signing the Electoral Reform Act — the Unity Act — on Inauguration Day. The ideal scenario would see Senator Chuck Schumer (D-NY), Senator Kirsten Gillibrand (D-NY), and Senator Bernie Sanders (I-VT) introduce the Electoral Reform Act with its twelve fixes illustrated above to the side, prior to 19 December, while Donald Trump joins them — and Speaker Paul Ryan (R-WI-01) — in a major national address — also prior to 19 December — on fixing the rigged system and re-enfranchising the 70% now blocked from ballot access and meaningful vote by the two-party duopoly.

Trump has many talented people working for him, but none of them seem to understand the larger narrative or the urgency of his moving beyond being a 27% “fringe” president to one who can mobilize the 73% who did not vote for him while offering the 1% a Truth & Reconciliation (everyone gets the truth, no one goes to jail) exit strategy.

By the by, once Trump demonstrates the agility and resolution to transfer his entire business inclusive of all of his personal investment — ideally as a series of gifts with no taxation — he should plan on taking the annual salary as his sole source of income. Eight years to flush the swamp and save the world. Worth doing.

NOTE 1: While Trump has finally — weeks late — begun to point out that Clinton did not win the popular vote if one deducts the 3 million or so illegal immigrants, dead people, and double voters — or any popular vote in any state other than California, where most of the fraud occurred — he has failed totally to point out that Hillary Clinton is a completely illegitimate Democratic nominee who blatantly stole the nomination from Bernie Sanders with electronic voting fraud in 13 states and other forms of fraud elsewhere. Trump’s team seems to lack a grasp of the electoral fraud nuances and is not serving Trump well in this vital area now of great interest to the public. He could demand a recount in California — there are no deadlines for filing such a request — but at a minimum he should educate the public with respect to Hillary Clinton’s theft of the nomination and her pervasive use of electoral fraud across all fronts.

Trump is also strangely silent on the millions of votes likely to have been influenced by the undeclared illegal substantial donations in kind from Facebook, Google, and Twitter in manipulating search results in favor of Hillary Clinton (to include censoring of all references to Clinton as a criminal) and against Trump (to include gratuitous emphasis of Hitler as a synonym for Trump — defamation by any standard). 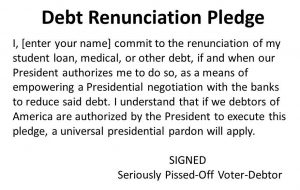 NOTE 2: Trump is reputed to be very aware of both sovereign debt and individual debt as the two sucking chest wounds likely to derail his ambitious spending and reconstruction objectives. Debt renunciation by individuals and small businesses — combined with a presidential pardon, in effect a legalized debt jubilee — threatens trillions of dollars of predatory loans and is the one thing Donald Trump could mention today — along with Electoral Reform — that could unite the 99% in his favor while checking the 1%. The debt renunciation pledge empowers him to re-negotiate the debt and puts the 1% in his debt if he elects to leave some of that debt on the table for them.

Sepp Hasslberger: A Super Economy without Money — and Michael Hudson on Need for Debt Jubilee

Worth a Look: Killing the Host – How Financial Parasites and Debt Bondage Destroy the Global Economy

Chuck Spinney: Be Very Afraid — Obama Kept the Debt He Promised to Write Down and Now Pressure is On for Governments to Sell the Commonwealth Piece by Piece

Worth a Look: The People’s Money – How Voters Will Balance the Budget and Eliminate the Federal Debt

Steve Piezenik: How We Brought Down the USSR – Religion, Military, Finance, Culture — All Tools George Soros is Trying to Apply to the USA with his “Purple Revolution”