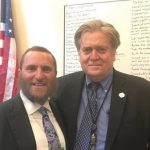 Tip of the Hat to Colleen Shalby of the Los Angeles Times for sharing a transcription of Steve Bannon’s white board goals — important goals but a tiny fraction of what Donald Trump actually promised to do on the campaign trail. See the color coded list at the end for all those promises — one third done, one third stalled, one third never happening.