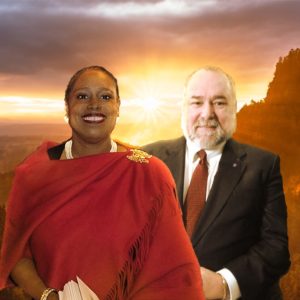 Robert David Steele, CEO of EIN and founder of #UNRIG: Summer of Peace and Dr. Cynthia McKinney are sponsoring a national Meet-Up on Civics (#UNRIG). A tour is planned.

In partnership with Dr. Cynthia Ann McKinney, the first black woman elected to the Congress from Georgia, a six-term Representative known world-wide for her ethics, her humanitarianism, and her commitment to the truth, he has created a new website, unrig.net, and a new Meet-Up, UNRIG.

Both Steele and McKinney will be opening their national campaign to foster a conversation about how the public can take back the power, with a joint appearance in St. Louis on 3 July.

“We have created #UNRIG as a concept because our legitimately-elected President, Donald Trump, is on the record as saying we have a rigged system, and now he is doing nothing to unrig it. We are raising funds via Generosity by INDIEGOGO (#UNRIG: Summer of Peace) toward a national tour intended to inspire a conversation across every Congressional District in July, and a demand by constituents of every Member of Congress in August when Members are home and cannot hide, that they sign the Integrity Pledge and pass the Election Reform Act — the Integrity Act — in September when Congress reconvenes.

The website offers free documents and free do-it-yourself ideas for pins, embroidered polo shirts, bumper stickers, posters, and American flags flown upside down, the traditional signal of distress — an ethical legal means of citizens demonstrating, on the 4th of July and beyond, that they do not like living within a rigged system the President is doing nothing to unrig.

The campaign has begun scheduling both personal appearances and skype appearances for the months of July to November. Churches, labor unions, chambers of commerce, and colleges are especially encouraged to invite the team of Steele-McKinney to offer an educational summary of why every eligible voter should demand that their Senators and Representatives sign the Integrity Pledge in August and co-sponsor the Integrity Act in the Fall. — in time to impact on the 2018 elections.

#UNRIG — an idea whose time is now.