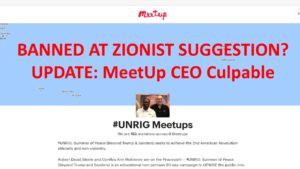 UPDATE 2: MeetUp CEO is actually culpable here.  There is clearly Zionist influence but it was direct.  Story is told here:

We don’t make this stuff up. MeetUp embraces #RESIST, most of whose chapters were created by the Zionist front, the Anti-Defamation League (ADL) and then turns around and bans us, fortunately before we spent any money or time setting up the 435 chapters. This is a clear example of how social media is controlled. #RESIST is a seditionist movement calling for the impeachment of our legitimately-elected President, and in the words of Loretta Lynch, “blood in the streets.”

Here is what else we are hearing:

that Netanyahu is furious beyond belief with Syrian ceasefire and Trump/Putin meeting; that he called Lindsay Graham and screamed at him, demanding that he and McCain move up plans to do chemical attack via Al Nusra and blame it on Assad; that the Zionists are furious that Americans are realizing it was Israel rather than Russia doing the leaking (and sponsoring the Epstein-Maxwell pedohilia blackmail campaign that ensnared most politicians and many judges); and finally — the best news of all: that a shadow movement has begun in which politicians will be outed for taking bribes from Israel, starting with Rubio, Graham, Schiff, McCain, and so on. Israel is furious at Trump, beyond belief. AIPAC going nuts!

The “correlation of forces” has changed. Zionist influence over the US Government is going to be challenged every day from this day forward. CEOs who are complicit with Zionist (not to be confused with Semitic) treason will be held accountable by the public.

UPDATE 1: Copy of our letter to the MeetUp Legal Team


The cc’s to this message are Dr. Cynthia McKinney, six-term Congresswoman and co-founder of #UNRIG: Summer of Peace; my self being the co-founder and recent nominee for the Nobel Peace Prize; Mr. Ivan Byrdsong our national MeetUp manager until your company precipitously and without discussion closed down our 435 MeetUps worth $77,300 in annual revenue, and Professor Sarah Westall, a business professor who is interviewing me tomorrow about this situation.  I include our Pro representative as well. I plan to highlight ethical and business practice lapses in tomorrow’s interview. Professor Westall seeks your comment in time to include in tomorrow’s show — I am also proposing an article for a business journal highlights how mistakes of this magnitude happen all too often. I plan to accept every interview offer I get after our press release goes out tomorrow pointing to the video that Professor Westall will be posting.  I plan an open letter to your CEO distilling this email to you and posted across the Internet. You are about to experience the fall-out that PayPal experienced when they cancelled WikiLeaks without any deliberative process. I am willing to pause if you give me a date certain, this week, when you will inform of us of reinstatement or not.

We can resolve all of this right now if you will reflect on the below information and then engage with me in an agile responsive manner.

01 #UNRIG: Summer of Peace is an educational non-profit civics education campaign sponsored by Earth Intelligence Network, a 501c3 accredited by the IRS in 2007. These is absolutely NOTHING in the way of tone or content that warrants your dismissal of our network.  Below is the only content appearing on each MeetUp page:

As with all of the 435 chapters of #UNRIG, this chapter will be devoted to the educational concept and mission of #UNRIG:

CONCEPT: Everyone without regard to race, color, creed or any other factor comes together on one core principle: Unrigging the System. #UNRIG is a big tent — ultimately we pray #UNRIG and #RESIST merge into #2ndAmRev.

MISSION: To restore integrity and truth to governance, with the informed will and wisdom of We the People at its heart.

Each chapter is responsible for recruiting a diversity of members from Alt-Right to Alt-Left without regard to political party affiliation (all parties are part of the problem), for educating constituents, and for persistently asking their Representative and their two Senators to sign the Integrity Pledge committing to co-sponsorship and voting for the Election Reform Act — the Integrity Act — in September.

It’s  that simple. Only you can do this. Dr. Cynthia McKinney and Robert David Steele are available for skyping in, and chapters as well as donors will shape the schedule for the RV touring the country from 1 August to 15 November.

03 By way of context I note with interest  that your are allowing to continue 1087 or so chapters of #RESIST, a seditious organization dedicated to impeaching our legitimately-elected President and calling for a Summer of Violence — or in former Attorney General Loretta Lynch’s words on video, “blood in the streets.”  I am told that most of the #RESIST MeetUps were founded by the Anti-Defamation League (ADL). Regardless of who founded them, the contrast between our focus on an ethical, non-violent civics education network and their focus on protests in the streets, many of which are destined to turn violent, could not be more pronounced.

04 #UNRIG has been under attack ever since Dr. McKinney agreed to be the co-founder.  As the only Member of Congress to ever refuse to sign the American Israel Public Affairs Committee (AIPAC) Pledge to put Israel First within Congress, she has been a target her whole life.  Her district was gerrymandered out of existence, and when she was on the verge of winning a seventh term in another district, the election was stolen from her. I myself, a former naval officer who bitterly resents the Israeli attack on the USS Liberty as well as Israeli bribery and blackmail of most members of Congress, agree with our President’s emphasis on America First and believe that all Members of Congress must renounce any pledge to a foreign power or an agent of a foreign power which AIPAC assuredly is. I don’t imagine you have time for nuances, but there is a difference between anti-Semitism and anti-Zionism — both Dr. McKinney and I as former presidential candidates understand that difference, and we have made quite certain that everything we do respects and favors our nine million Jewish voters while being quite explicit about our intolerance of the manner in which Congress is being bribed and blackmalied (e.g. the Jeffrey Epstein pedophilia campaign with Lolita Island and his no name hotels in NYC and DC that are wired for covert video and audio).  We have touched a nerve with the Zionists.  That is what this is all about.

05 IndieGoGo, PayPal, and every person that has interviewed me or Dr. McKinney has been subject to a stream of libelous emails for the past several weeks, alleging that we are thieves, con men, running a scam, etcetera. The ethics and business practices of IndieGoGo and PayPal are superior to yours — they recognized the libelous orchestrated campaign for what it has been, and we are in good standing with them. Most of my hosts are deleting and banning the mix of Zionist trolls and bots that has been unleashed in a very serious effort  to shut down #UNRIG: Summer of Peace.

06 In your case I suspect an automation glitch.  The Zionists have long excelled at using spam reports and “inappropriate content” reports to bury those they regard as a threat to the control that Israel has over US national security policy — to include manipulating Jared Kushner into giving Saudi Arabia nuclear weapons and nuclear weapons delivery capabilities so as to foster a “limited” nuclear war between Iran and Saudi Arabia, Israel’s follow-on to the Iraqi war on Iran they got Bush-Cheney-Rumsfeld to support, to include the provision of chemical weapons from the US to Iraq for use against the Iranians. I suspect that despite the innocuous and completely righteous content as provided above, the Zionists orchestrated numerous reports of “inappropriate content” and your ssytem allowed an automated threshold to shut us down and send us a form email.  There was no human with a brain in the loop, which is the first change you need to make, particularly at the Pro level.

07 Maki Yamamoto, our superb Pro representative, has not been allowed to do her job. She should have had this matter referred to her and a discussion opened with Dr. McKinney and me. Has this happened, this mess could have been avoided.

It is my personal view that you should examine the MeetUps we had posted if they are still visible to you and satisfy yourself that we are ethical, righteous, and a good client for a nation-wide network of 435 MeetUps.  I have earmarked the $6,525 a month to pay for these from the $30K that IndieGoGo disbursement that reaches us this Friday.  You have lost a lot of goodwill among all those that were preparing to host the MeetUps, including 100 assigned hosts from each of three different major groups that wish to restore the integrity of our election process.

It is my personal view that you should examine every report or email that I believe led to this unjustified and perhaps automated shut-down, and conclude, as IndieGoGo and PayPal have concluded, that the allegations are without merit and if accepted by you, would make you complicit in tortuous interference against our totally ethical non-profit educational endeavor. We do not plan to sue you at this time but we have had several pro bono offers to do so, from very credible people who know how vulnerable you are on this. If we were to change our mind, the disclosure of all of those reports and all emails and telephone conversations that led to our being banned would be our first item of business.

We seek the immediate reinstatement of our MeetUp Pro network, before opening of business tomorrow Eastern time, and your assurance that our account will be locked down by legal and not allowed to be closed by anything other than a court order. If you will do that, we will totally recast our press release and interview series into one that praises MeetUp for its intelligence and integrity in refusing to be intimidated or mis-informed into precipitous unwarranted actions against its legitimate clients.

My cell is REDACTED.  I welcome your call by appointment or a number from you that I can call.

Thank you for the email that made this reeclama possible.  Time is the one strategic resource that cannot be bought nor replaced. You have hurt us deeply, without cause. Your CEO will get a copy of this email with its time stamp as part of our letter to him if we do not receive full satisfaction from you. I look forward to hearing from you today or tomorrow.