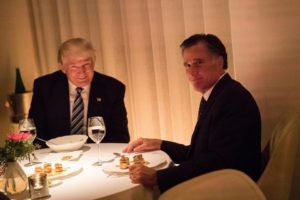 Trump is no dummy. He hasn’t been drugged.  He’s only managed to outmaneuver the dems, the rinos, a 95% negative media environment, NFL,  Soros/Antifa/BLM and Hollywood. He is surrounded by family because they likely report to him. Kushner is a notable exception and Ivanka fell for the music. It happens. It doesn’t mean people can’t be recovered.

The look on Romney’s face is priceless. Keep the faith.