Koko say no. State of the Nation say yes.

Trump has only ONE response to the ongoing soft coup being run by rogue elements within the U.S. Intelligence Community

Superb graphic and extracts below the fold. 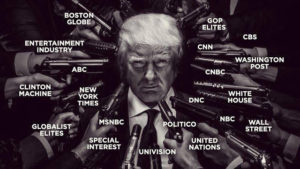 However, it is the countless agents of Deep State who populate the Zio-Anglo-American Intelligence Community that pose the real problem.  In this regard, it’s virtually impossible to determine who is really serving the POTUS, and who is working against him.

Phi Beta Iota: Both the US Intelligence Community rogue elements and the media and the traitors within the US Government and the two-party tyranny elite are the best of the servant class. CIA is not the enemy — like all other institutions it is split between 90% good people trapped in a bad system, and 10% — many funded contractors not government employees — who are out and out international criminals who could reasonably be turned over to an international tribune, brought before a special court, or exiled in a Truth & Reconciation process. With help from William Binney and Robert Steele our President is now believed to have all the names, dates, and places (as well as cash amounts where relevant) harvested from the 99% of the NSA database previously not processed. The death of the Deep State is certain.  What is not certain is the rapidity and completeness of the President’s reinstating the Constitution, re-engaging the 99%, and leading a national Grand Strategy conversation. The center of gravity for Making America Great Again (MAGA) is the 99% not the 1% — we are not certain the President sees that logic just yet.