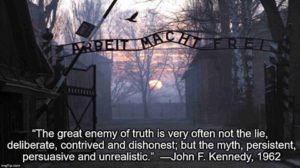 “The Jews spread this lie by using their influence and their arsenal of media outlets. They label anyone denying the story as an anti-Semite. They falsely claim that during World War II, upon a decision supposedly made by Hitler, over six million East European Jews were burned in ovens, designed especially for that purpose.”

The mainstream journalist added, “The Jews use the story about the holocaust as a means of political and material extortion and in order to gain the sympathy of the world. This is of course completely groundless. They pretend to be the victims, while they are, in fact, the number one perpetrators of genocide, robbing and plundering the rights of others.