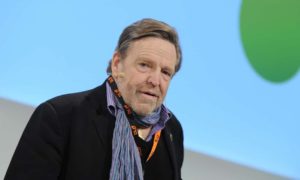 Cattle rancher, lyricist for the Grateful Dead and internet pioneer who became a digital rights activist

John Perry Barlow, who has died aged 70 after a long period of ill health, started as a cattle rancher, wrote lyrics for the Grateful Dead, and then became a digital rights activist and a champion of free speech on the internet. His ideas captured the mood of a generation that believed people could reinvent themselves in a new virtual world with no government controls and no national boundaries.

ROBERT STEELE: I knew John Perry.  It was a privilege. He spoke for me twice, and will always — with Howard Rheingold — represent the very best of the counter-culture movement that helped me understand how retarded it is to rely on spies and secrecy for the totality of your “intelligence.” John Perry as we called him, inspired me.  May God keep him and may he return to us as an angel. All that we might be in the future stems in part from his vision.

1992 Barlow (US) Information Wants to Be Free

John Perry Barlow: Spies Without Borders I — How USA is Capturing Billions of Internet Accounts Around the World