About Paul Adams: In the mid-80’s, he co-founded Tracking Technology Inc., a forerunner to GPS. He became a stockbroker for eight years, then segwayed to project finance, consulting for such notables as Darryl Quarles (writer/director of Family Ties & Fresh Prince of Belair), Larry Namer (founder of E!Entertainment), Joseph Nikolson (founder of TradeStation and Bonds.com), and Richard Waryn (former Investment Manager of the World Bank’s private arm, the IFC), through his company New Planet Group (NPG LLC). He has lived in nine countries and knows three languages.

Phi Beta Iota: These are operational and tactical promises and objectives.  From where we sit President Donald Trump is still in the midst of a strategic war to take down the Deep State, and is winning that war against the 1% with over 10,000 indictments and full use of the NSA data (99% unprocessed). 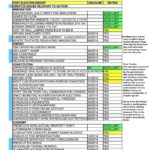