Revenge of the tribes: How the American Empire could fall

Yale professor Amy Chua has two precautionary tales for Americans, and their names are Libya and Iraq. “We’re starting to see in America something that I’ve seen in other countries that is not good,” says Chua. “We don’t want to go there. We don’t want to get to the point where we look at people on the other side of the political spectrum and we see them not just as people that we disagree with but literally as our enemy, as immoral, “un-American” people.” Tribalism is innate to humanity, and it is the glue that holds nations together—but it’s a Goldilocks conundrum: too much or too little of it and a nation will tear at the seams. It becomes most dangerous when two hardened camps form and obliterate all the subtribes beneath them. Chua stresses the importance of “dividing yourself so that you don’t get entrenched in just two terrible tribes.” Having many identities and many points of overlap with fellow citizens is what keeps a country’s unity strong. When that flexibility disappears, and a person becomes only a Republican or a Democrat—or only a Sunni Muslim or a Shia Muslim, as in Iraq—that’s when it’s headed for danger. In this expansive and brilliant talk on political tribes, Chua explains what happens when minorities and majorities clash, why post-colonial nations are often doomed to civil war, and why you can’t just replace dictators with democracy. Amy Chua is the author of Political Tribes: Group Instinct and the Fate of Nations.

Phi Beta Iota: Yale is a branch of the dark side of CIA, and the primary historical source of most of the mind-control (MKULTRA) research, today largely funded by the Department of Defense and seeking to subvert entire societies, not just individuals. Still, Yale was at one time the very best Ivy League university with a strong focus on morality, and we pray they may one day return to that exalted status of being righteous in the eyes of God. 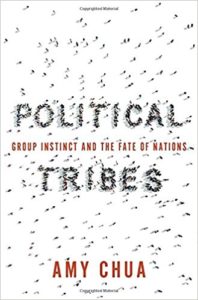 Just as Washington’s foreign policy establishment has been blind to the power of tribal politics outside the country, so too have American political elites been oblivious to the group identities that matter most to ordinary Americans – and that are tearing the United States apart. As the stunning rise of Donald Trump laid bare, identity politics have seized both the American left and right in an especially dangerous, racially inflected way. In America today, every group feels threatened: whites and blacks, Latinos and Asians, men and women, liberals and conservatives, and so on. There is a pervasive sense of collective persecution and discrimination. On the left, this has given rise to increasingly radical and exclusionary rhetoric of privilege and cultural appropriation. On the right, it has fueled a disturbing rise in xenophobia and white nationalism.