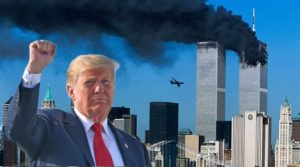 President Gets 9/11 Memo, But Will He Respond to It?

A group of 27 scholars have united in writing “Memoranda to the President” to demand Trump expose the truth of 9/11 this year. Will he respond? This compilation of writings is free online at http://tinyurl.com/911-POTUS.


“God Bless America and God Bless Donald Trump.” So begins a collection of memos to President Donald Trump by 27 experts on the attacks of Sept. 11, 2001.

The presidential briefing on 9/11 was organized by Robert David Steele, a former CIA Clandestine Services Officer and founder of the Open Source Intelligence movement. Contributors include David Ray Griffin, widely considered the unofficial dean of 9/11 studies, Peter Dale Scott, the University of California-Berkeley professor emeritus who popularized the term “deep state,” Richard Gage of Architects and Engineers for 9/11 Truth, and two dozen others including yours truly.

Steele knows people close to Trump and believes the president will “get the memo.” In a recent radio interview, Steele said:

Phi Beta Iota: The 9/11 Truth Memoranda for the President are available free online, or via Kindle and CreateSpace, at http://tinyurl.com/911-POTUS.