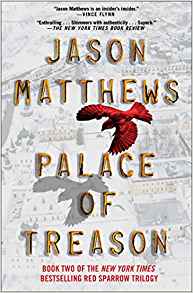 After I read and then reviewed the first book, Red Sparrow, I was so deeply impressed that I immediately ordered the other two, this one and The Kremlin’s Candidate, intending to read them on airplanes.  That did not last.

This book went to my night-table, then to reading two hours past my bedtime, to last night when I could not put it down and read it until midnight.  That is not normal for me, particularly as a former spy who considers most spy books to be utter crap.

This is not only the most authentic and nuanced book I have read about spying and why human intelligence and particularly offensive counterintelligence and covert action matter, but it is spectacularly well put together.  The author is gifted in turns of phrase that make you laugh or cry or both.

There is some disinformation in the book, I won’t spoil that, all three books were approved by CIA’s Publications Review Board (PRB) that has been superbly professional in its review of my own non-fiction books, but I will note, in support of the authenticity, that there was a time when CIA’s Directorate of Operations (DO) was obscenely proud of having the highest rates of alcoholism, adultery, divorce, and suicide across the US Government.  I myself have 23 by-name suicides in my professional past, I never bothered to count the other three.

This book again humbles me.  Those of us doing clandestine operations and covert action in the Third World were not held accountable to denied area standards and that moves me to my final point: this trilogy is so damn good it should be required reading by every CIA employee, not just IN ADVANCE by those being sent to Ops I and Ops II training, but EVERY CIA employee.  Too many of them, including the high school clerks in the basement that refuse to INDEX ALL NAMES in prisoner interrogation reports, think of CIA as a job, not a calling.