According to former Bush-CIA black ops specialist Chip Tatum, Barr was part of Operation 40, an Agency-linked criminal gang that moved huge quantities of drugs and was involved in many high-level political assassinations, including those of the Kennedies, Swedish Prime Minister Olof Palme, and dozens of others. Ironically, Trump—who tossed a few rhetorical punches at the Bush Crime Family during the 2016 Republican primaries—has just nominated a man who represented the Bush CIA drug cartel, both within the CIA itself (1973-1977) and later when he served as “Opium Poppy” Bush’s Attorney General. 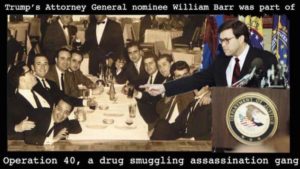 Gunderson: Well, isn’t that interesting? …so we have Vice President Bush, we have Ollie North, we have William Barr involved in the drug-operation. It’s that simple, isn’t it?

ROBERT STEELE: So many of us are trying very hard to support President Donald Trump, but this appointment — combined with sending another bimbo to the United Nations (D-Day a highlight in strong US-German relations) — is costing him what little credibility he has left in the foreign affairs arena. The Korean unification and denuclearization is a CHINESE initiative for which Trump is the closer. The Middle East remains a mess, with an Admiral just assassinated, most likely because he was in opposition to the planned Deep State Zionist false flag simulating an Iranian patrol boat attack on a US Navy ship — attentive readers will recall that President Barack Obama was obliged to fire both James Mattis (then CINCCENT) and a Navy Admiral for an earlier alleged plan to carry out a false flag attack to justify a counter-strike against Iran. General Mattis, as a Marine, feels very deeply that Iran was responsible for the Marine Beirut Barracks attack.  I am one of perhaps five Marines who have actually read the entire Long Commission Report, and my own conclusion is that Israel was responsible for that attack, a false flag attack partially motivated by the ignominious stopping of an Israeli tank column by a single Marine Corps officer almost exactly one month before the Beirut Barracks bombing.

President Trump was elected by 27% of the eligible voters. He has lost, by my own rough calculation, at least 20% of that number because he has failed to end our engagment in pointless wars overseas and many are realizing that before 2020 they will see their health insurance double. If President Trump does not clean out the White House (get rid of Pence, Bolton, Kushner (Pretty Boy) and Ivanka (Daddy’s Girl) he may find himself defeated for the Republican nomination in 2020. 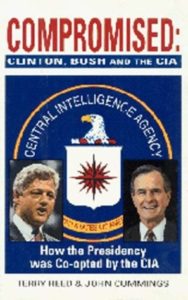 The appointment of Barr is understandable as a conciliatory gesture toward the Bush Crime Family and a foundation for taking down the Clinton Crime Family, but it is not a sound appointment. The President is being impetuous and ill-considered, once again.  Barr may also be attractive because he championed pardons for all the Iran-Contra criminals, and can be relied upon to do the same for all those breaking the law on behalf of President Trump.

Many people are trying to help our President.  He appears to be surrounded by people filtering his mail and lying to him daily. He is not connecting with the 73% who did not vote for him, and he is doing nothing to provide for an end to the two-party tyranny and the election of an honest Congress in 2020.

He may have some great moves planned for December and January, I hope so, but these two appointments are not, in my view, acceptable to any citizen who cares to study the background of the individuals in detail.

Labeled, in 1994, by the late and highly respected American investigative reporter William Safire as the “Cover-up General”, this report notes, William Barr began his career as a CIA operative and protégé of CIA Director George H.W. Bush—whom Bush moved out of the CIA into the corridors of powers of Washington D.C. to act as his “fixer” if anyone came close to the crimes he was committing—and whose “services” were needed when Bush’s association with the criminal drug money laundering bank BCCI was about to be exposed, and with Barr having being appointed by Bush to be his US Attorney General, saw Barr quickly shut this investigation down.

When both Bush and the CIA were, also, threatened by the Iran Contra Affair, involving US weapons illegally sold to Iran to fund Central American terrorists, this report further notes, Barr, again, destroyed this investigation by his masterfully engineering the Presidential Pardons of all of its conspirators before the Special Counsel prosecuting them could ever set foot in a courtroom—and that today has paved the path for Trump to do the same.

Most dangerous to the Clinton Crime Family about Barr becoming President Trump’s Attorney General, though, this report concludes, is that he has publicly railed against Hillary Clinton not being prosecuted and jailed for Uranium One crimes—that involved her receiving tens-of-millions of dollars she illegally funneled through her money laundering organization called the Clinton Foundation—and once appointed as Attorney General will, without a doubt, see Barr waging full war against Hillary Clinton—and whose ammunition to do so has just been shockingly revealed to be over 6,000 pages of evidence and documents compiled by a group of US government investigators proving, beyond all doubt, the massive crimes committed by both Hillary Clinton and her husband former President Bill Clinton—and whose former CEO of the Clinton Foundation is now “spilling the beans” to Trump’s investigators telling them “I know where all the bodies are buried”—thus confirming the Security Council’s earlier assessment, made just days, ago that America is about to explode when President Trump and Hillary Clinton begin their “Celebrity Deathmatch”, and that’s coming soon to television screens everywhere.

IT’S ALL OVER! With AG Nomination Trump Proves Swamp Will NOT Be Drained

The investigative report below [Dope Inc.]  only scratches the surface of William Barr’s documented corruption and criminal activity while in high office.