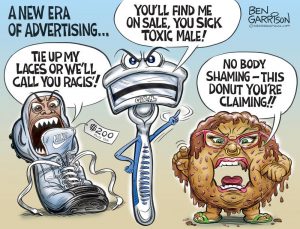 This idea, that traditional male traits are ‘toxic’ and dangerous, has largely remained confined to feminist blogs and social sciences faculties, but now the American Psychological Association (APA) has jumped on board.

Phi Beta Iota: We do not make this shit up.  These assholes are not stupid — they are paid to put out crap like this.  The family, the community, and the distinct special values of both the masculine and the feminine, have been under attack for over a century. The time has come to slam down hard on this bullshit. The President should place these people under investigation, to include extreme intrusive examination of every email, every call, every financial transaction, associated with this clinically insane subversion. We are reminded that these are the same fucks that endorsed waterboarding and other forms of torture.

Enjoy the cartoon, fuck them all — especially “Gillette” — assholes.