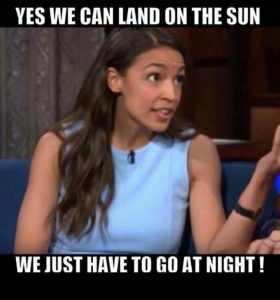 PS Anyone whose initials are recognized nation-wide has a bright future.

Below the fold: her full bio from Alert Reader objecting to the 1 April joke.

Ocasio-Cortez was born in The Bronx, New York City, on October 13, 1989, to Blanca Ocasio-Cortez (née Cortez) and Sergio Ocasio in a Catholic family.[She has a younger brother, Gabriel Ocasio-Cortez. Her father was born in the Bronx to a Puerto Rican family and became an architect; her mother was born in Puerto Rico. She has described her Puerto Rican community as an amalgamation: “We are black; we are indigenous; we are Spanish; we are European.” Until age five, Ocasio-Cortez lived with her family in an apartment in the neighborhood of Parkchester. The family moved to a house in Yorktown Heights, a suburb in Westchester County.

Ocasio-Cortez attended Yorktown High School, graduating in 2007. She came in second in the Microbiology category of the Intel International Science and Engineering Fair with a microbiology research project on the effect of antioxidants on the lifespan of the nematode C. elegans. In a show of appreciation for her efforts, the MIT Lincoln Laboratory named a small asteroid after her: 23238 Ocasio-Cortez. In high school, she took part in the National Hispanic Institute’s Lorenzo de Zavala (LDZ) Youth Legislative Session. She later became the LDZ Secretary of State while she attended Boston University. Ocasio-Cortez had a John F. Lopez Fellowship. In 2008, while Ocasio-Cortez was a sophomore at Boston University, her father died of lung cancer. During college, she served as an intern in the immigration office during the final year of U.S. Senator Ted Kennedy’s tenure. “I was the only Spanish speaker, and as a result, as basically a kid—a 19-, 20-year-old kid—whenever a frantic call would come into the office because someone is looking for their husband because they have been snatched off the street by ICE, I was the one that had to pick up that phone,” Ocasio-Cortez said. “I was the one that had to help that person navigate that system.”

When her father died intestate in 2008, she became involved in a long probate battle to settle his estate. She has said that the experience helped her learn “firsthand how attorneys appointed by the court to administer an estate can enrich themselves at the expense of the families struggling to make sense of the bureaucracy”.

Phi Beta Iota: Alert Reader is correct to point out that mocking AOC as a bimbo is as wrong as mocking Ivanka Trump as a bimbo.  We agree. This was an April Fool’s post.  However, Alert Reader also did not get the memo — AOC was selected as an actress to play the part of a Member of Congress bya group that ended up electing seven Members of Congress with a mix of Bernie Sanders email list (perhaps stolen from Bernie Sanders by AOCs Chief of Staff) and very high end marketing no normal first time candidate could afford or produce. Three of the seven were literally picked  off the street after auditioning for casting calls.

Mongoose: Accusation that Alexandria Ocasio-Cortex is an Actress Totally Coached as a Puppet Congresswoman

Below is the “refutation” of the AOC videos, in our view there is more truth to the allegations than falsehood. AOC is being played.  She will — as Alert Reader suggests — eventually rise above her creators, but right now she is the creation of the “Justice Democrats” and most if not all of what she is using for her political theater is provided by them in script form.

We do respect AOC vastly more than we respect Nancy Pelosi. The other Justice Democrat calling for the impeachment of our President is a village idiot, they blew it on  that one.  Between Ilhan Omar and AOC we can see a valuable viable “new” Democratic Party in gestation.