Changes in technology, politics, and business are all transforming espionage. Intelligence agencies must adapt—or risk irrelevance.

Letter to the Editor below the fold.

Lucas on Spying = 30 Years Late Missing 96% of the Solution

Edward Lucas on “The Spycraft Revolution” is quite disappointing….and exactly 32 years behind the start of the Open Source Intelligence (OSINT) revolution that started at the Marine Corps Intelligence Activity (MCIA) in 1988, evolved to the US Special Operations Command (USSOCOM) J-26 in 1997, and was crushed by the Central Intelligence Agency (CIA) by 2000 for fear of its being shown up as the naked Emperor it actually is — along with the other secret elements that process less than 1% of what they collect and are generally useless to everyone except the banks that profit from war and torture, which is of course why they exist, not to serve the public.

Lucas reminds me of Sir David Omand and Professor Mark Phythian, both devoted to the myths and mystique of expensive secret operations that produce, “at best” 4% of what a major decision-maker needs, according to General Tony Zinni, then Commanding General of the U.S. Central Command (USCENTCOM) engaged in two wars and twelve joint task force actions.

My review of their book, Robert Steele, “Intelligence at a Cross Roads: To Be Or Not To Be (Review of Principled Spying by David Omand and Mark Phythian),” American Herald Tribune, 25 June 2018, serves as an indictment of the superficial overview by Lucas. You are free to use the graphic below if you wish. Real intelligence — real decision-support — should be rooted in a mass of data that is largely not secret, not online, and not in English. The top ten minds on any given topic do not have security clearances and do not want security clearances. Daniel Elsberg had this right when he lectured Henry Kissinger in the 1970’s — fall in love with secrets and you become like a moron. Never mind that it was CIA planting the bombs in churches and monasteries across Viet-Nam, and that the war was designed to use up our military so we would have to buy it again, never mind the cost in human lives and economic dislocation. 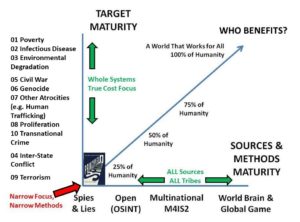 As a former spy myself, with five times the regional recruiting average for traitors and a full range of experiences including managing a global media campaign, direct penetrations of terrorist organizations, a false flag operation, offensive counterintelligence against a denied area country, future technical systems planning, and CIA’s first artificial intelligence projects, I find the piece by Lucas to be very much beside the point on two fronts: first, we have solutions for all the impediments he discusses, the article reads like a comic book encouragement for Ghana, which successfully recruited a CIA secretary long ago; and second, as I wrote in my first book, ON INTELLIGENCE: Spies  and Secrecy in an Open World (AFCEA, 2000), what matters now is getting a grip on all information in all languages all the time. We can discuss the fact that the current clandestine service and current analytic services are monstrous jokes, a front for covert operations including torture and regime change and drone assassinations having nothing at all to do with creating peace and everything to do with creating profit for banks, some other time.

The President — the Cabinet — Congress — and the public — need an Open Source Agency (OSA) such as I have been proposing since 1992, and such as the Office of Management and Budget (OMB) has twice approved at IOC $125M FOC $2B contingent on the President or a Cabinet Secretary asking for it. There are two presidential decision memoranda on the table, being violently opposed by Jared Kushner, John Bolton, Mike Pompeo, and their CIA allies, and both integrate Bill Binney’s Thin Thread data mining technology now commercially available through a new company, Pretty Good Knowledge.

My prediction: by 2026 the US secret world will be cut by up to 70%, and the 30% worth saving from each secret agency rolled into new directorates in a revitalized CIA, itself first cut by 70%, with the office of the Director of National Intelligence (DNI) abolished and the office of Director of Central Intelligence (DCI) reinstated. What will be different is the ethics of intelligence. Intelligence is meant to be decision-support focused on creating a prosperous world at peace, not cover for action for creating chaos against the 99% for the profit of the 1%.

President Trump is vastly smarter and more “read in” than most realize — this includes being “read in” on free energy and other Open Source Everything Engineering (OSEE) opportunities that lower the cost of good living to 10% of what the failed Western model that profits from waste charges now — and most of you have no idea just how much better our world is going to become once we drain the swamp and restore the centrality of the US Constitution and particularly the Preamble of that Constitution:

Everything the US secret world does today is in distinct direct violation of the US Constitution. The time has come restore integrity to how we do intelligence.