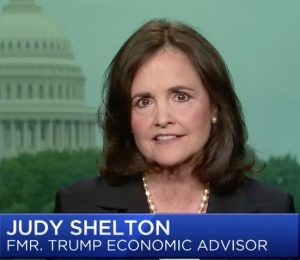 The White House is said to be vetting Judy Shelton for a seat on the Fed board. She told us what she would bring to a central bank whose policies she has long criticized.

ROBERT STEELE: Everything about this person is positive. Not only would she make a superb Chairman of the Federal Reserve, she would make a great Secretary of the Treasury if and when the President tires of having Goldman Sachs sitting on him.

Her position against contrived inflation, and her position on asset backed currency and against currency manipulation (as well as exchange rate manipulation) is  to the right of righeous.  This is a GOOD person.

Wayne Jetts: Federal Reserve is America’s Largest Debtor – President Donald Trump Should Hold Them Accountable (Nationize the Fed but Do NOT Nationalize their Debt)