Top articles and extracts below the fold.

Bloomberg: Marianne Williamson Is Just What the Democratic Party Needs

Finally, there is Marianne Williamson. When she first began to speak, I googled her, as I suspect did many other Americans. Her eccentric manner can be distracting, but I recommend instead focusing on her values. Her performance suggests that Democrats need to take a broader, deeper set of values into account: sometimes love and New Agey spiritual values, other times historical values. Her answer about making America the finest country for a child to grow up in was perhaps the best single moment of either debate, and that too stemmed from her understanding of values. 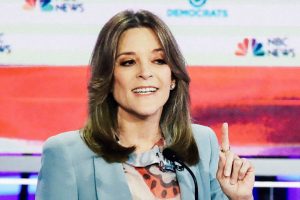 In the closing moments of Thursday night’s Democratic debate, Marianne Williamson looked straight ahead and told the audience that her plan for her candidacy is to harness the country’s love. “Mr. President, if you’re listening,” she said, addressing Donald Trump directly, “you have harnessed fear for political purposes, and only love can cast that out. I am going to harness love for political purposes,” she continued, raising her eyebrows. “And sir, love will win.”

CBSNews: Marianne Williamson on bringing spirituality back into politics

“I think the issue is that politics has swerved,” Williamson said, opining that American politics has turned “toxic.” “The problem is with an over-corporatized, over-secularized political conversation so disconnected from values, so disconnected from issues of moral and ethical responsibility, as to have broken itself off of the major river of American thought and American life. That’s why so many people can’t relate to it.” She said that the U.S. is suffering from a “sociopathic economic system” that doesn’t value the American worker. 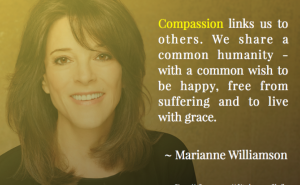 Many viewers of Thursday’s broadcast found Williamson’s energy an “interesting” departure from the rest of the crowd.

UPI: Marianne Williamson running for president as a ‘political visionary’

Williamson first announced her bid for the White House in January, saying that America is in a broken state and in need of “political visionary” more than a “political mechanic.”

“I do not see American politics today as a conduit for a deep and meaningful transformative experience, either for our citizens or for our country,” she states on her campaign website. “Our government is now little more than a system of legalized bribery, and our traditional political establishment at its best is a container for an obsolete conversation about democracy and values and people.”

The Atlantic: What Do You Do When No One Takes You Seriously?

Williamson told me she saw Trump’s election as a blaring siren that the political establishment had ignored a revolution building underneath its feet. “The American people are not stupid. They know the game is rigged. They know we’re screwed,” she said. “The crying out for change was itself legitimate. Obviously they got the wrong kind of change agent. They got a con artist.”

2020 Democratic presidential candidate and writer Marianne Williamson on Tuesday put forth a foreign policy agenda that emphasizes “peace-building” and a return to global agreements spurned by the Trump administration. The author and spiritual adviser also promoted the use of “soft power” rather than “military might” to deal with international conflicts.

For progressive, religious people like me, the 2020 candidate has a powerful message. It took a long time, but Democrats are poised to retake ground we ceded to a supposed faith and family–based party that nominated Trump, made him president, and cheered him on every step of the way. 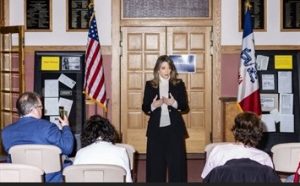 Presidential campaigns can poll at zero and still have something interesting to say about America. In Iowa on the trail with Marianne Williamson, who helped shape today’s conversation about spirituality.

Marianne Williamson says she is running for president to bring a “moral and spiritual awakening” to America — and that includes a $100 billion investment in reparations for slavery. “We need to get real in this country,” the bestselling author and lecturer told a CNN town hall in April. “… Racism is a character defect. Let’s end this. Let’s fix it.” Williamson, 66, is a Texas native who has never held public office and is best known for being a spiritual counselor to Oprah Winfrey.

This is a campaign event for Marianne Williamson, the self-help author and now semi-serious Democratic candidate for president. She’s very much in the “long shot” category, but she has gathered enough support to qualify for the first debate — which is more than the sitting governor of Montana and a congressman from Massachusetts can say. She’s a friend of, and former spiritual adviser to, Oprah Winfrey; the person who officiated Elizabeth Taylor’s wedding to Larry Fortensky; and a onetime congressional candidate from L.A.’s 33rd District whose supporters included Kim Kardashian, Katy Perry, and Chaka Khan, and whose campaign anthem was written by Alanis Morissette (“We’re going down / Unless we move to new ground … Unless we revive this Constitution / From sure disintegration / Live out this revelation / Today”). In that race, she also received an endorsement from Dennis Kucinich, who remains an admirer. “Marianne is brilliant, insightful, and spiritually aware,” he says. “She is a true leader and does not require an office for affirmation, which is why she speaks with such compelling candor at a time this country desperately needs truth-tellers.”

“I’ve had a 35-year career addressing people’s trauma and how to turn that trauma into transformation,” she continues. “All that a country is is a collection of people, so the same psychological and emotional and spiritual forces that prevail within the journey of an individual prevail within the journey of a nation. The political Establishment is so blind to the deeper psychological and emotional factors at work. Our feelings do more to drive our behavior than does our intellectual analysis. Where people are not loved and not supported, despair arises, and large groups of desperate people are one of the most dangerous sociological elements possible. Desperate people are more vulnerable to ideological capture by genuinely psychotic forces.
That’s true whether it’s a corner of an American city, where people are vulnerable to gangs, or the whole United States, where people are more vulnerable to an authoritarian demagogue.”

Spiritual leader and best-selling author Marianne Williamson, who has skirted thisssssss close to being anti-vaccine in previous appearances, had quite a mouthful to say about our healthcare system—or what she called our “sickness-care” system—in the opening minutes of the second Democratic presidential debate.

Ms. Williamson has built her campaign on the idea that love can be a political force. Her political heroes include Bobby Kennedy, Abraham Lincoln, Thomas Jefferson, Franklin D. Roosevelt and Dwight D. Eisenhower. She said she would not make any moves in Afghanistan until she first spoke to Afghan women.

Though she identifies as Jewish, Williamson served five years as Minister at Detroit’s 2,500 member Christian Church of Today, a non-denominational member of the Association of Unity Churches. Steven Tyler was a recurring musical guest, Los Angeles Magazine reports. In her early days in politics, LA Magazine reports, Williamson was known to refer to herself as “Obama 2.0.” 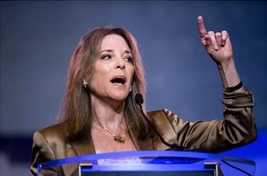 The self-proclaimed “bitch for God” wants us to look more closely at who we are.

”Our national challenges are deep, but our political conversation is shallow,” she said. “My campaign is for people who want to dig deeper into the questions we face as a nation and deeper into finding the answers.’’

“She uses the language and attraction of sensuality to hold an audience,” one Psychology Today journalist wrote in a profile of Williamson in 1992. “Her charisma is sexual and humorous. Watching her perform is more like wrestling naked with Venus than kneeling with the saints.”

For decades, Williamson said that medicines don’t cure disease but positive thinking does. Now she’s taking her quackery to a new and dangerous level: the anti-vaxxer conspiracy.

Phi Beta Iota: The Daily Beast routinely lies and defames people. They appear to be a paid outlet for the Cabal and attack people who threaten the Cabal. These are the same people who said that elite pedophilia networks do not exist. Vox is also more often than not a drive-by assassin for the cabel, but in this instance has painted a useful negative picture that will help Williamson evolve her campaign strategy.

Today, America once again is in turmoil. A spiritual cancer of fear threatens to undo the progress we have achieved. Discord and hatred are dissolving our communal bonds and undermining the spirit of social responsibility—the duty we feel toward one another. In this powerful spiritual manifesto, Marianne Williamson offers a tonic for this cultural malignancy. She urges us to imitate the heroes of our past and live out our deepest spiritual commitment: where some have sown hatred, let us now sow love.

Williamson argues that we must do more than respond to external political issues. We must address the deeper, internal causes that have led to this current dysfunction. We need a new, whole-person politics of love that stems not just from the head but from the heart, not just from intellectual understanding but from a genuine affection for one another. By committing to love, we will make a meaningful contribution to the joyful, fierce and disruptive energies that are rising at this critical point in time. In the words of Abraham Lincoln, “we must think anew, and act anew . . . and then we shall save our country.”