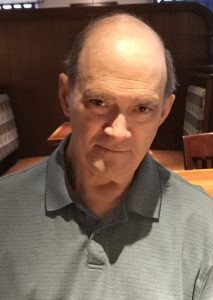 FINAL REPORT: I had lunch with Bill today, he went for crab instead of his usual steak.  Here are two photos, one of him at lunch in full health, and the second of his scar.  I had not realized they went to open heart surgery, he got the full enchilada, three surgeons, two taking veins from his legs while the third cracked his chest and ripped out his heart for repairs. 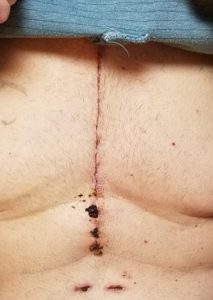 I cannot articulate the deep joy in my heart over Bill’s survival, and we both agree that the University of Maryland Hospital is TOPS in all respects and merits every donation any of our wealthy colleagues might think to offer.

Bill Binney is America’s most patriotic and competent Signals Intelligence (SIGINT) Senior Intelligence Service (SIS) officer. He is also the top mind for assuring electronic election device integrity in 2020. The memorandum to President Trump is being put into the mail, with tracking, tomorrow afternoon.

Original and Past Updates Below the Fold 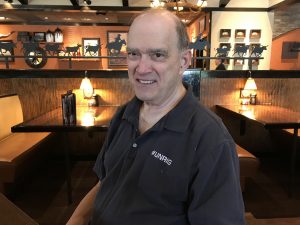 Kirk Wiebe, one of Bill Binney’s closest colleagues, has just confirmed to me that Bill Binney is alive and well.  I will update this post as soon as I have more details.

This patriot merits our support in his time of recovery, please pray and meditate for him.

UPDATES Below the Fold

They ended up not doing a stint.  He is settled.  They did a special test looking for ulcers this week-end. They are doing catheter investigation tomorrow.  His blood pressure is now normal.  He is still in the hospital.

Do not yet know when surgery happens. In meantime, his vitals are normal.

Bill’s surgery is either Friday or Monday.

Bill is being prepped for surgery at noon, he is expected to survive and return to his room within four hours.  This is vein access surgury, no chest cuts.

Spoke to the nurse, he is in post-operations (a benign intensive care unit) and moves back to a normal room tomorrow morning.  He received FOUR by-passes, is resting, no complications at all.  I was told I could  call and talk to Bill directly tomorrow morning and I will do so, posting another update then.

He’s alive after FOUR by-passes.  He was on the phone with his son when I called so I will call later to get a direct confirmation from him on how he feels.

I spoke personally with Bill Binney today, he had just gotten off the phone with my favorite retired General who really cheered him up.  Bill told me that he is feeling great, that he is eager to get back in the fight, and that the food at the University of Maryland Hospital in Baltimore is *great.”  He will be in the hospital for four more days, which is heartening (I had an uncle dismissed from the hospital to a half-way house after four days).  It is my hope Bill will be going straight home, not to a half way house.  He now has his own phone.  I will call him on Saturday for the next update.

From Kirk Weibe who visited Bill in the hospital this afternoon:

Bill doing very, very well. His pulse was 58, three beats per minute higher than his normal pulse. Plan calls for going home in 4 or 5 days. Directly home, no halfway facility. He is in a “step down” ward (normal out-patient) now.

I just spoke with Bill, he is in very good spirits and health, in the normal rooms where the food is not as good as in intensive care, but still good.  He expects to go home Sunday or Monday.  We talked about our plans to create Web 3.0 with Thin Thread as the backbone.  He has so much to live for. I cannot articulate how happy I am that his heart has been completely repaired without intrusive surgery, and he is now ready to return to the battle.  He shares my view that the President merits the Mother of All Landslides.

I have spoken with Bill, he feels great, he may be one of the best four bypass recoveries they have seen in some time.  Tomorrow he moves to a physical  therapy location for one or two nights, and then home.

Kirk Weibe reports that Bill is going home today and will receive rehabilitation services at home, where he has a mature son as a live-in safety net.  I expect Bill will clear his home and cell message boxes and his email as well, within next day or two.

I have spoken to Bill’s adult son, Bill is resting at home without complications.