Is the Democratic Establishment Backing Trump While Rigging the Nomination Against Bernie and Tulsi?

An assistant to one of the party bosses, who asked not to be identified for fear of losing his job, pointed out that the DNC actually makes more money as a result of anger about Donald Trump’s Presidency than they would if a popular progressive, such as Bernie Sanders or Tulsi Gabbard, became President. One person pointed out that a ticket with Warren and Harris would be labeled progressive and the expected loss would be used to McGovern or kill the progressive movement within the party.

People fed up with the Democratic Party have encouraged both Tulsi and Bernie to run together as independent candidates. Tulsi especially has cross-party appeal for independents. Bernie is popular across the board as well and many view them as an unbeatable ticket, no matter what their political affiliation. Most Americans are independents or third party members by almost a two to one margin over the registrants of either of the major parties. However, because their Congressional seats are considered critical to fighting the military industrial complex and Wall Street, it is doubtful either Tulsi or Bernie will run as an independent. 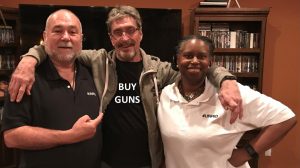 Phi Beta Iota: We do not make this shit up. What this also means is that Steele-McKinney could win on a Libertarian ticket with the coalition cabinet, balanced budget and twelve core promises. It continues to be our view that #UNRIG — election reform enabling all voters to have a shot at being on a ballot and elected and enabling the vote of 100% of the voters to be counted — is a non-partisan non-negotiable condition for Donald Trump being eligible for re-election (along with defending the Constitution, standing for America First not Israel First, and banning 5G). Make the call, Mr. President.  Please.