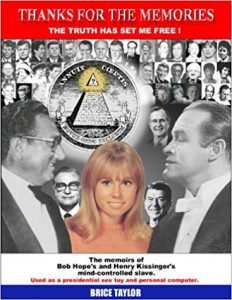 This book was referred to me by a PhD MD for evaluation after they read my review of Cathy O’Brien’s book, TRANCE: Formation of America, which is the real deal.

I have read the book, and took it so seriously I even arranged for the below lists of people, organizations, locations, and key terms to be created. I have also consulted, in my capacity as a Commissioner and Chief Counsel for the Judicial Commission of Inquiry into Human Trafficking and Child Sex Abuse, with other members of the Commission and selected witnesses known to be credible.

This book is a book of libelous lies rooted in the theft of two stories: the original Cathy O’Brien story that was leaked into the mental health community before it was published (and very stupidly given to Sue Ford aka Brice Taylor by her therapists who did not realize that this legitimately traumatized personality would immediately absorb the details as if they were their own); and a screen play by Rob Robinson originally entitled Starshine. I understand that he has filed legal claims in relation to his stolen intellectual property.

What is in doubt — and my conclusion based on both a careful reading and consulting with others who are familiar with the details I mention above — is the veracity of this entire account and most especially its accusation against Bob Hope (RIP 27 July 2003).

In my view, every person, organization, and place named below has a legitimate legal case against Sue Ford aka Brice Taylor for defamation if they are innocent.   This is not to say that all named (e.g. Kissinger, Bohemian Grove) are innocent, only that this account is not first-hand.

This kind of rip-off, “fake story” harms all of the truthful witnesses that our Court has sought to publicize as part of our non-profit educational commitment to public awareness now in direct support of President Donald Trump’s executive order against human trafficking. We ourselves have  on rare occasions been caught up with witnesses who embellish real childhood experiences with pedophilia parents and then extend that to include major public personalities such as President Richard Nixon, and we have become more cautious as a result.

I condemn this book and its author as a fraud, and hope that this fabrication does not undermine the credibility of accounts we have found truthful, such as Cathy O’Brien’s TRANCE: Formation of America.