No magic intercepts were needed, we now learn from Iraq, to arrange for the assassination of Soleimani. We now learn that the ambush was staged through diplomatic channels, drawing Soleimani to Iraq in order to receive an offer of reduced sanctions from President Trump.

ROBERT STEELE: If true (this is sourced to the Iraqi Prime Minister who has a great deal to lose if perceived to be complicit in the assassination) then there are three possibilities:

01 The primary proponents of this were the Secretary of State and the Vice President. This assassination, of an invited diplomatic envoy, is so far over the top that all those in the chain of command are indictable under all applicable international treaties and conventions. The President either demonstrated very bad judgment himself, or did not understand the massive

02 The President was lied to and did not understand the import of what he was ordering, and he should immediately fire the Secretary of Defense, Secretary of State, and Director of the CIA, while also pulling out of Iraq and Syria and Afghanistan. For bonus points he could deliver Pompeo, in shackles, to the Iranians, this was all Pompeo and the Zionists with Esper and Haspel playing dead and leaving their integrity in the last toilet they visited.

03 The President is a genius, Soleimani is not actually dead, this is a massive PSYOP cooked up between the President and the Supreme Leader to shut down the Zionists, Saudi Arabia, and US neo-cons, enable the President to leave the Middle East as he promised during the campaign, and ultimately terminate  the Zionist state and restore Palestine to the Palestinians. I am not discounting the possibility that the President has taken his Wrestlemania show international, read the below review for perspective on that possibility.

Below is an alleged photo of Soleimani with US Troops in Iraq.  I am not convinced. They all look Iraqi to me, with the one exception being the individual on the left. What I do believe is that ISIS and all the so-called terror groups we have been fighting were created by Saudi Arabia, Israel, and the CIA with Pentagon equipment and re-supply under the Obama Administration, and there is a certain elegance to President Donald Trump and trusted US military opening channels to Iran generally and Soleimani specifically. 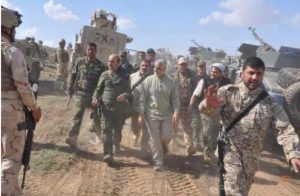 I think the truth lies somewhere between 2 and 3. I also believe that there are negotiations going on right now over the US withdrawal from Iraq and the US has no alternative but to comply.  There may be interesting global financial changes between now and 15 January that will allow Iraq to “pay” something toward the US exit (never mind that we invaded and occupied their country on the basis of 935 lies) allow President Trump to claim victory on all fronts.

I have been told by multiple sources that Iran will not seek blood revenge if the President fires Esper, Pompeo, and Haspel, pulls out of Iraq and Syria, and makes the deal on Palestine. That will be Soleimani’s epitaph — he died that Palestine might live again.

Robert Steele in Tehran Times: WORLD WAR III? President Donald Trump Was Lied To, Will This Martyrdom Lead to a Restored Palestine?