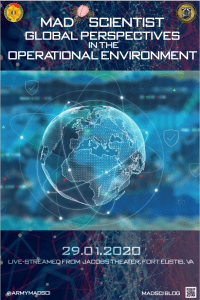 U.S. Army’s Mad Scientist Initiative is conducting an online survey querying your thoughts about the Operational Environment. This survey will also feed NATO’s upcoming Operations 2040 Project. It takes only 5 minutes to complete the short survey here. Interim findings will be discussed during the 29 Jan online conference.

Together with the NATO Innovation Hub team, participate in the U.S. Army’s Mad Scientist online conference. It aims at providing international perspectives on a diverse array of topics affecting the Operational Environment.

ROBERT STEELE: I have been contracted as a Subject Matter Expert (SME) for this endeavor and begun my research. My preliminary outline is taking shape, and I offer it below to inspire anyone who wishes to communicate their thoughts to me (15 February is my deadline for final draft submission).  From where I sit NATO is dead — gone — by 2026 UNLESS it evolves into a core capability for Whole of Government and Multinational, Multi-Tribal information sharing and intelligence (decision-support) that can address all four of the threat classes (my 1992 graphic below has been ignored since it was first introduced to the Marine Corps University and then the Army War College Strategic Studies Institute), and match the Chinese dollar for dollar in waging peace and creating prosperity.  The US sends hunter killers teams into Africa.  The Chinese have installed the Internet across Africa (where every cell phone is like owning a cow) and get all the cellphone data as a bonus.  Who’s defeating the enemy without fighting?  They are.  We’ve lost.

Side note: Big Army has gone down the rabbit hole on AI-enabled operations. They don’t seem to get that we process 1% of what we collect; that we collect 1% of what is written; that that is in turn 1% of what is published which is in turn 1% of what is known. And we don’t do culture, foreign language, religion, and more.  We don’t do holistic analytics and true cost. Big Army is still about spending money on technology that will never work as advertised, is not inter-operable, cannot keep up with shifting targets on the battlefield, and generally just makes everything worse.

What is the threat?

What is a grand strategy  that can defeat the threat?

What is the force structure needed to defeat the threat?

What is the intelligence / IO construct needed to do holistic analytics, true cost economics, and Open Source Everything Engineering (OSEE) sufficient to defeat the enemy (including our own Deep State and corrupt Shadow Government) across all functional mission areas, not just military (e.g. trade)?

How does that construct change how we plan and implement strategy, operations, tactics, and technical/acquisition programs across Whole of Government and among Multinational allies?

How do we sustain national power and influence in the 21st Century?

How can NATO become the hub for integrating education, intelligence, and research across Whole of Government mission areas, while assuring that the public is educated and engaged with truthful information that creates a prosperous world at peace where war becomes a last resort rather than an endless profit center for the 1% at great cost to the 99%?


This book brings together three monographs on grand strategy, global reality, and re-inventing the U.S. Army as well as the rest of the Department of Defense — and in passing addressing needed changes in diplomacy, development, and intelligence, all of which are just as broken as the military.

The U.S. military today is 50% waste, committing crimes against humanity in over 100 countries — alongside CIA drone assassination operations — and generally not able to win a war nor maintain a peace. Our generals and admirals are not being held accountable for telling the truth — they are themselves sadly divorced from reality and unable to appreciate the truth even when it is presented to them.

The secret world costs the U.S. taxpayer over $100 billion a year, and yet, according to General Tony Zinni, USMC (then Commanding General of the U.S. Central Command engaged in two wars and twelve joint task for actions) provides “at best” 4% of what a major commander needs (to which one can add, and nothing for everyone else.

This book of readings provides all that is required to reform U.S. intelligence so that it might honor the Constitution and serve the President, the Cabinet, the Congress, and the public.

Holistic analytics, true cost economics, and Open Source Everything Engineering (OSEE) are the non-negotiable enablers of the post-Western economy, probably led by the Chinese since the Americans have refused to listen to me for 30 years. To create a prosperous world at peace, a world that works for all, we need the reinstall ethics as an operating system, refocus on human capital, and understand that online economies cannot exist in isolation — one reason I think Tencent might be positioned to bring its online-offline vision to the world, and be the primary actor in laying down a cyber-grid on top of the physical One Belt One Road.

PRELIMINARY COMMENTARIES (Will Be Updated As More Received):

No prior battle or conflict in any way prepares us for a US-Russia conflict. We have seen certain features that such a war would have in the fighting in Donbass and the Middle East, but in the same way that the 1912-13 Balkan Wars and the 1936-38 Spanish Civil War had some features of the succeeding world wars, neither was in any way representative of the intensity and destructiveness of the big wars they presaged.

Drones, missiles and mini nukes, those will dominate and traditional ground force actions, while still vital, will fall well down the strategic pecking order.

Destructiveness of the fighting will be of an unprecedented nature, munitions have developed so far. Large conventional formations will be sitting ducks so combat will be small units doing their best to survive in a shattered landscape. To form into a large group is simply to invite a missile or drone strike.

Irregulars are likely to play a large role, as in the Balkans in the 90s.

Think of the ‘rattenkrieg’ of Stalingrad (war of the rats) and you have some idea of what the warfare will be like – small groups of men clinging to shelter from overwhelming bombardment firepower, more recent urban fighting in Chechnya was of the same nature and Syria has had similar battles in cities like Alleppo.

The questions they ask reveal that there is already an accepted paradigm underlying their perspective.  They assume the primacy of major battles requiring a focus on executions thereof.

The most appropriate book for the future structure of military capabilities is The Grand Strategy of the Roman Empire by Edward N. Luttwak, 1976.  We have too expensive a military with too weak of a society to support, particularly economically.  Rome learnt from its Punic wars that the exquisite army and navy of Carthage eventually lost because conflict was being fought out of accumulated capital while Rome fought out of income.  Long term staying power requires constant balancing of economic considerations.

Major wars based on massed forces no longer make sense because of changes in technology – the USA’s ability to project power great distances abroad has been declining each year.  And offensive stances have given way to defense in depth as the most efficacious power basis.

The way forward is a systems approach that takes in capacity in all its permutations.  This is not new, the USA has already done that at the close of WW II.  When it de-commissioned much of its huge military, it took measures to structure the civilian economy to build emergency capacity in a cost efficient way — in the way China is doing now.

P.S. – Ultimately the Roman Empire was defeated by innovations with regard to horses: the innovation and adoption of stirrups, bridles and horseshoes.

How about a grand strategy to eliminate the threat, not just defeat it?  These guys should start to get into the proactive security business, working to eliminate problems before they become significant.

Phi Beta Iota: Below is a graphic showing ten high-level threats to humanity and twelve core policies that should be orchestrated to eliminate all ten threats to humanity — NATO (and US military) still focusing on the two red dots and US (and NATO) are in fact behind the elective wars and state-sponsored terrorists generally funded by Israel and Saudi Arabia, so we have a bit of a cognitive disconnect to deal with.  Perhaps NATO is ready to think holistically?

Why the New Silk Roads are a ‘threat’ to US bloc

What the New Silk Roads are proposing is wide-ranging, economic, interlinked integration from East Asia, through Central Asia, to Iran, Iraq and Syria all the way to the Eastern Mediterranean. Just like the Ancient Silk Roads. No wonder vested War Party interests are so uncomfortable with this real peace “threat.”

No wonder strategic fear was glaringly visible at the NATO summit in London last month, which called for ratcheting up pressure on Russia-China. Call it the late Zbigniew “Grand Chessboard” Brzezinski’s ultimate, recurrent nightmare.

How to Stop NATO

We should harbour no illusions regarding NATO: as it approaches its 70th anniversary, the North Atlantic Treaty Organization appears to be a clearly obsolete, very costly, exceedingly cumbersome and significantly fossilized organization that is stuck somewhere in the world of the middle of the last century.

The task is to replace the bloc security system inherited from the Cold War era with a new system that exceeds its predecessor in such critical parameters as openness, efficiency and reliability.