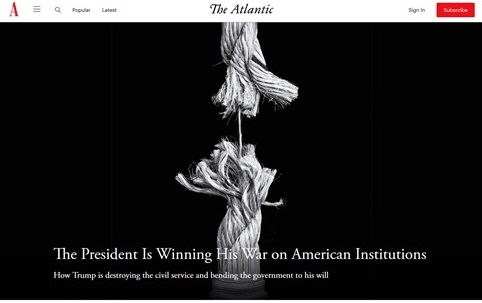 The President Is Winning His War on American Institutions

Phi Beta Iota: A total load of crap. Yes, the President is winning.  Against the Deep State and its entrenched Shadow Government of traitors and thieves. The sanctimonious hypocritical ignorance of this author is typical of the media servants of the Deep State. Below is a short video duet discussing the article.

ROBERT STEELE: My quick notes.  Was not worth a more detailed critique. What is good about this article is that it helped John and I articulate the need for a “good purge.”

James Baker and he anointed – actually traitors, not public servants?

has a problem with M-13 animals and travel ban, never mind genocide of Palestinians, 9/11, Epstein, and wrecking of the US economy by the Zionist MEGA group started by Brofman and Wexner, both of whom probably fund The Atlantic – and never mind Licensed to Lie, The Divide, and Griftopia

3, Andrew McCabe – arguably a traitor who should be indicted, this article is a whitewash that defames the President and covers up all of McCabe’s misdeeds  — the author outright lies about the Russian witchhunt and the impeachment trial being legitimate, without mention to the role of alleged traitor John Brennan and the complete fabrication of the Russian witchhunt, followed up by CIA analyst Eric Ciaramella who I think should be sued for defamation.

Pontificates on moral courage.  Where is the moral courage in failing to confront Vice President Biden and Obama and Clinton on their looting of all the aid that was sent to the Ukraine and then kicked back, on Clinton selling Syria and Yemen to Saudi Arabia, Libya to the French, and Uranium One to the  Russians?