I recently declined an invitation to travel to Iran for a conference honoring the martyrdom of General Qasem Soleimani.  I declined because what Iran has planned is the usual mob fest that will issue stupid declarations.  My fellow CIA operations officer Phil Giraldi has participated in such events and to the enormous credit of whoever runs our borders these days, has not been hassled upon his return. Here is what I  told my Iranian contacts would be worth doing. 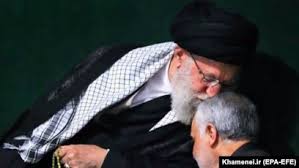 Honoring the general’s death is best done by honoring the truth about Palestine and the invented Zionist state of Israel.

In my view the Americans are ready now to turn on the Zionists and the path is open to an international conference that clearly establishes the falsity of the Zionist myth; the absolute right of Palestine to exist as Palestine; and the relative security that can be guaranteed to Jews that choose to remain in Palestine.

The following books should be translated into Arabic, Chinese, Farsi, French, Spanish, Turkish, and Russian, all within 30 days.

Review: We Will Not Be Silenced – The Academic Repression of Israel’s Critics Edited by William Robinson & Maryam Griffin

Review (Guest): Dishonest Broker–The Role of the United States in Palestine and Israel

Review: A Palestinian Theology of Liberation – The Bible, Justice, and the Palestine-Israel Conflict by Naim Stifan Ateek

Review: The Hundred Years’ War on Palestine by Rashid Khalidi

There should then be an international campaign to circulate these books, free online in all translations — the publishers can be offered a deal or ignored — and the process should begin — and Gandhi began it with the British — to plan the transition with a liberation date in 2022.

An international conference should be hosted in Cairo or Istanbul, live streamed to the world, very structured, that makes the case for the perfidy of the Russian criminal Zionists and the difference between Judaism — all Jews should be loyal to their countries of citizenship — and the benefits to the world of eradicating the invented state of Israel that is a state sponsor of terrorism and the primary briber and blackmailer of the US Congress.  It is also the primary insider trading and intellectual property theft threat on the planet.

It would be interesting in the intervening months to carry out a multinational counterintelligence survey in which China, Russia, and the USA, among others, collaborate in defining the damage done by Zionist Israel to the world since its inception — a “true cost” economic study with holistic analytics, video interviews, and conclude with a professional documentary that is offered in all the languages above and English, free online.

I would gladly participate in such a conference.