A HPSCI staff duty by the Democrats with zero participation from the Republicans has produced the following:

As the international community’s tracking and analysis of the spread of COVID-19 has graphically demonstrated, intelligence collection must not be confined to traditional methods like secret meetings and technical means at Langley or Fort Meade. Historically, the IC’s open source intelligence (“OSINT”) mission was conducted by the Foreign Broadcast Information Service, which compiled and translated foreign broadcast reports relevant to the IC’s mission. Many of these reports were subsequently made public, enriching the United States’ collective understanding of the plans and intentions of our adversaries.

The evolution of the foreign media landscape, digitization of information, and worldwide connectivity is still under-appreciated in the IC as a key collection opportunity.

Over the years, IC OSINT capacity has been repeatedly reorganized, including the establishment and subsequent dissolution of the Open Source Center. This has raised questions about the overall level of priority placed upon its mission. Just as open source information can generate valuable intelligence about foreign cyber actors’ intentions and activities against commercial and private networks, so too can open source provide the sort of lead information and context to drive the IC’s S&T intelligence analysis.

Analysis of investments in start-ups, the establishment of academic partnerships with top-notch researchers, and even scrutinizing the members of a social networking group contribute to the IC’s assessments of adversary capabilities on S&T, which in turn will help counter those advances.

The Subcommittee sees a strong future for OSINT within the IC, so long as it receives the appropriate attention and resourcing. Coupled with AI and machine learning, there are exciting new possibilities for the development of open source intelligence programs.

Consequently, the Committee’s FY21 IAA commissions an independent study on open source intelligence, to develop recommendations for the future governance of OSINT within the IC.

ROBERT STEELE: This is a Deep State play for another $100 billion in taxpayer dollars for “research” that will have nothing to do with  the public interest. These child staffers know nothing. Their witness list was mediocre in the extreme. and they appear to be so stupid (or willfully ignorant) as to know nothing of what has gone before, including the brilliant work of Jan Herring, first DCI NIO for S&T, and the team under Gordon Oehler in the Office of Scientific & Weapons Research.  Shit like this just makes me sick to my stomach.  Let’s see how the election goes.  Congress — both Members and staff — needs to be flushed down the toilet. #UNRIG Election Reform is long over-due.

Below is a proper starting point for OSINT, which demands its own agency and a complete consolidation of all OSINT spending into a CBJB as Joe Markowitz originally envisioned.  Joan Dempsey — Jim Clapper’s puppy — killed OSINT.  That is her epitaph.

OSINT is HUMINT. CIA continues to betray the public interest across all fifteen slices. Anyone who thinks OSINT is “social media” is a deliberate traitor or a  fucking idiot — in either case, they should be barred from the discipline.

Here is the Herring Triangle, one of the single most powerful graphics I have ever seen — it’s a shame CIA screws over its pioneers in favor of deviants. 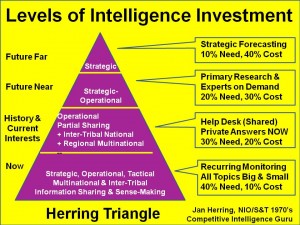