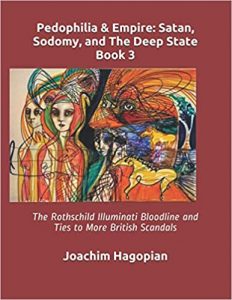 The intersection of the Rothschild Family, the British aristocracy and senior members of the British government, industry, and media — along with sustained deliberate cover-ups by British police — will go down in history as one of the greatest crimes against humanity.

Pedophilia — the rape of children — torture to produce adrenochrome — Satanic Ritual Abuse (SRA) — and the murder of children, both for cannibalism and for disposal — are “routine” for the highest echelons of the Deep State or the 1% some call “the Cabal.”

The prevalence of pedophilia at the highest levels of each Commonwealth country, with Australia (included in the final Rest of World volume) and Canada (included in the Americas volume) will stand with the German and other holocausts as one of the greatest crimes against humanity in modern history — a crime, as the first volume documents, that has its roots thousands of years ago and has been common to the elite since Adam and Eve were beguiled by Satan to produce Cain.

The United Kingdom is so horrifically central to this massive global atrocity centered on the City of London that it requires two of the five volumes to document properly.Footnotes at a PhD level of scholarship are provided for every fact in this book.

Uniquely the book is also free online at https://pedoempire.org, where a tag cloud identifies the number of times a name appears in chapters — the Murdochs, for example, appear in five chapters; the Rothschilds in twenty five chapters across the totality of the series with five chapters remaining to be written for the final two volumes.

The author, Joachim Hagopian is a West Point graduate and former Army officer who then acquired a graduate degree in Clinical Psychology and worked as a licensed therapist in the mental health industry for 25 years, inclusive of work with children.

The totality of this work is scheduled to be made into a movie documentary. The web site, the books, and the movie are in service to the eradication of Satanic pedophilia. This is the final battle for President Donald Trump on behalf of all humanity, and has been recently discussed by Lucian Lincoln “Lin” Wood Jr., one of America’s most accomplished attorneys who works closely with both President Trump and the goddess of justice, Sidney Powell.The author,

Joachim Hagopian, is the sole copyright owner of this content in all its forms including the free website (https://pedoempire.org), the chapters in Amazon Kindle form, and the printed book.