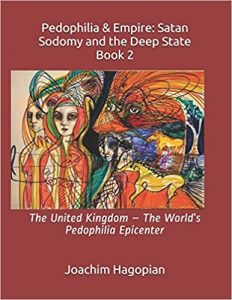 The centrality of the United Kingdom to Satanic and pedophile practices is so deep and broad that two of the five books in the series must be devoted to Great Britain. The third volume — the second focused on the United Kingdom — covers The Rothschild Illuminati Bloodline and Ties to More British Scandals. Canada is included in the North American volume and Australia in the rest of the world volume.This volume covers the British Royal Family going back 1,200 years; Sir Jimmy Savile and BBC (Buggering British Children for the cognocenti); the inter-related practices of Satanic Ritual Abuse (SRA), child torture and murder and the consumption of adenalized blood and body parts, and necrophilia. Margaret Thatcher, Tony Blair, and the most senior British Lords and officers of the government corrupted by Israel are also discussed.

Visit https://pedoempire.org for the book free online, translatable into other languages, with a tag cloud. This endeavor supports our President’s ultimate objective, to eradicate  the Deep State by educating the public on the degree to which Satanism and pedophilia including child  torture and murder are the essence of the Deep State and its depraved culture.