I am facing this problem.

After defining OSINT, I have to draw some background on it. The material available correlates OSINT with the US IC and the Cold War era. None of these will attract the Indian audience. Is there anything generic available on OSINT? Please help.

CIA made three really bad decisions in 1992 when I first went public with the Open Source Intelligence (OSINT) revolution after trying for four years, as the senior civilian responsible for creating the Marine Corps Intelligence Activity (MCIA), to get both the Department of Defense and the secret intelligence community to pay attention.

In 1989 the Commandant of the Marine Corps, Al Gray, agreed with me and at the suggestion of Mr. John Guenther, the ranking civilian in Marine Corps intelligence, put his name to the below reference that I ghost-wrote:

Immediately thereafter I published the below under my own name:

The three really bad decisions that CIA made, one well-intentioned, the others simply corrupt, were:

01 Admiral Bill Studeman, then Deputy Director of Central Intelligence, after agreeing to speak for me in 1992 — his speech “Teaching the Giant to Dance: Contradictions and Opportunities in Open Source Within the Intelligence Community” can be found on pages 57-64 of the NATO OSINT Reader that I produced with help from NATO ATC staff, gave responsibility for OSINT innovation to Dr. Joe Markowitz, a senior CIA analyst, rather than empowering me. Markowitz did  the best he could but simply did not have my passion and commitment. Perhaps it was for the best — no one was ready for OSINT.

02 Markowitz was smashed by the CIA’s Directorate of Operations , the clandestine service, which informed him that they owned Human Intelligence (HUMINT) and he was under no circumstances to deal with human Subject Matter Experts, only with commercial and online sources. The Open Source Centre — many overweight mostly women who came up the ranks of the Foreign Broadcasting Information Service (FBIS) skilled at monitoring foreign language media but totally unskilled as serious research, defaulted to the Internet.

03 Markowitz was smashed a second  time by Joan Dempsey, then Deputy Director of Central Intelligence for Community Managerment, who refused his very correct suggstion that we require all elements to contribute to a Congressional Budget Justification Book (CBJB), treating OSINT as a separate discipline and receiving the same integrated attention from the DCI as was applied to the Consolidated Cryptologic Program (CCP). Sadly, Charlie Allen, a very decent man then serving as DDCI for Collection, who should have known better, allowed Dempsey to get away with  this truly unprofessional mandate. I was not consulted.

The Internet is not OSINT in seven ways:

01 The Internet does not produce decision-support. Only a human analyst working with all sources including analog and human sources, and guided by a decision-makers requirement, can produce tailored decision-support — an answer to a specific question by a specific person.

04 Most relevant published information is both analog and local. This includes, for example, tax and property records, university yearbooks, and more. It also includes a wide variety of sources, softwares, and services. 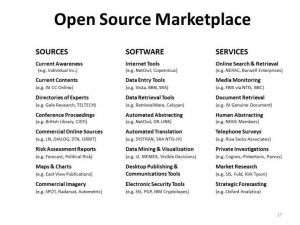 Here are the real heroes of the Open Source Revolution:

06 Subject Matter Experts (SME) do not publish most of their work online. There are two kinds of SME: those that define themselves with publications, and those that do not — for example, everyone from the non-academic tribes.

Those who are active in the open air — both professionally or as indigenous personnel (e.g. farmers, shop-keepers, non-profit workers, and more — do not publish at all, generally speaking. Their experience is totally existential.

07 The Internet is not how one can best identify and contract for humans.

There are three major ways to identify SME:

a) Citation Analytics. There is no substitute for using the Social Science Citation Index or the Science Citation Index or services such as Maps of Science (they also do Social Science and Humanities). Citation Analytics requires expert discernment — the US academic world is totally corrupt and there are citation “clubs” and incestuous circles (e.g. Harvard) — and multinational citation analytics is in its infancy.

b) Mention in Media including Academic and Non-Profit.  Here also discernment is required — 80% of those pontificating and being mentioned in media frequently are pundits who know nothing. Perhaps more interesting is the fact that journalists, if interviewed or incentivized properly, will identify those whom they are NOT allowed to quote (me, for instance) and they also know the 90% about people that cannot be published, such as who is sleeping with whom who is taking bribes, and more.

c) Word of Mouth. The best word of mouth is a proven expert identifying up and coming talent, for example, unpublished graduate students or mid-career government officers whose NEW KNOWLEDGE has not been published but is recognized as emergent and valuable. The worst word of mouth is rooted in incestuous circles such as Harvard people recommending their own — this is a problem with Freemasons, Catholics, Mormons, Zionists, and others.

The Internet is particularly unsuitable for identifying SME because it is in my view at least 60% fraudulent including completely made up articles signed by non-existent people.

a) if it is online it is a generic broadcast and not decision-support.

b) if it is online it is 60-80% likely to be incorrect or improperly developed.

A SPECIAL NOTE FOR INDIA AND ITS FARMERS

Beyond OSINT lies Open Source Everything Engineering (OSEE). I am going to provide four graphics here, because just as OSINT puts a stake into the heart of the dishonest and dangerous and largely useless (to the 99%), so also does OSEE put a stake in the heart of the Western banks and the corrupt Western economic and financial model.

80% if not more of OSEE is NOT ONLINE.  This is reality. This is also why the Chinese company TenCent is going to kick India ass — they “get” that the future is a carefully managed blend of online SUBORDINATE TO offline.

My must current work on where I wish to go is below.