Do you think it wise to distribute OSINT into two components- analytical vs technical. Technical here means all those tools and wares that help in analysis. It doent mean any alleged omnipotent search engine that searches every thing.

For example, while ACH (Analysis of Competing Hypotheses) is an analytical method while the software that was later on developed by Mr. Heuer helped analysts feed in loads of data and reduce time taken for analysis.

Around 1992 I was ghost-writing for General Al Gray, then Commandant of the Marine Corps, and the below sentence is one of the best I have  ever produced, for his use in explaining to Congress why the Marine Corps at the time was unique for having Communications and Intelligence under the same flag officer.

I firmly believe that all of the collection agencies, includiing the human intelligence elements of CIA, DIA, FBI, military services, and assorted other rogues and rascals, are out of control precisely because they are divorced from BOTH the decision-maker(s) to be supported AND the analysts who are supposed to be making sense out of it all.

Discovery, Discrimination, Distillation, and Dissemination need to be integrated.  Below are two graphics that apply: 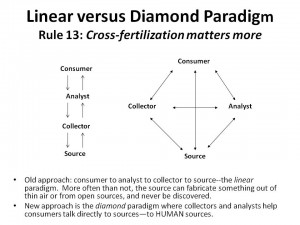 One of the finest experiences I had as a clandestine case officer was within the training environment at mid-career, first with Jack Davis, the dean of CIA instructors noteworthy for holding CIA leaders in scorn and disdain; and in the Mid-Career Course where I was honored with a seat by DDA Bill Donnelly as a reward for my (failed) pioneering while on detail to him to create the Artificial Intellligence Staff in the Office of Information Technology.

I will never forget the lesson I learned in the mid-career analysis exercise. The message traffic is less than 20% of what can be known.  You MUST MUST MUST walk around and talk to all the other humans, both collectors and analysis, to get everything that is NOT in the message traffic.

I applied this lesson when I was the senior civilian responsible for creating the Marine Corps Intelligence Activity (MCIA). Apart from designing the flagship study, Overview of Planning and Programming Factors for Expeditionary Operations in the Third World, I also took a look at how we define the threat. The below graphic comes from talking to every analyst in every agency having anything to do with studying the T-72 Russian main battle tank at the time.

The secret intelligence world and the military industrial complex default to worst case technical threat because that is a budget builder. In fact the threat changes depending on the level of analysis, and it also changes in context of use.

Every aspect of intelligence is HUMAN.  From requirements definition which is not done at all by the US secret world, to collection management to processing to holistic analytics and true cost economics (also not done) to decision-maker dissemination & explanation (done very very badly on very very limited topics in isolation from one another) it is the HUMAN factor that makes everything work (or not).

The HUMAN aspect becomes particularly important when leaders of intelligence and integrity commit themselves to both total M4IS2 as a philosophy & practice, and to the idea of a Smart Nation that is devoted to the well-being of the public in every possible respect, bringing together the eight tribes while using the military to manager a local to global world brain that also promulgates Open Source Everything Engineering (OSEE).