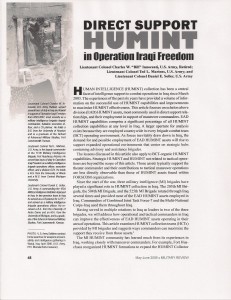 Original source comment, a CIA-trained SOF retired O-6: Article is loaded with some phrases and abbreviations that even I, who normally speaks that sort of thing with native fluency, had some problems with.  Seems to me that the military has taken a tough job, particularly in a combat zone, and made it even tougher through organizational and bureaucratic complexity as well as fielding a workforce to address the problem that probably is not sufficiently senior or personally mature.

Retired CIA Case Officer (C/O)  comment: There are two truth-tellers in this article.  The first is that it deals with echelon above division, which confirms that the US military is simply not trained, equipped, nor organized to do tactical clandestine human intelligence or overt human intelligence collection and integration.  The second is that doing “HUMINT” in full combat gear with tactical gloves, sunglasses and so on, is not HUMINT–we call it street-walking.    Neither HUMINT nor OSINT are serious disciplines today in the USA, on either the military or the civilian side.  The CIA does not do street-walking–they’re more upscale, and go directly to sleeping with local liaison.  Take your pick, neither of these is righteous good stuff.