First Base: The Eurozone worked very well to increase the economic welfare of its poorer members during the economic expansion of 2002-2008, but it is becoming increasingly clear that the interconnected character of the economies of Eurozone, together with the sacrifice of sovereign currencies in favor of the Euro managed by the European Central Bank, creates institutional rigidities and solvency problems that impede the formulation of counter-cyclical policies in these countries when their economic growth stagnates.  The attached two articles describe how these rigidities could spillover to feed back on and push the US into a double dip recession or an extended period of stagnation.

Second Base: Should the Nature of a Sovereign Currency Be Considered When Shaping a Counter Cyclical Economic Policy? A political consensus is emerging in the US to cut back on deficit spending, even though the US economy is at best in the early stage of recovering from a steep recession, or at worst on the cusp of a double dip recession, or even worse, a debt deflation.  This is a very dangerous possibility, made more so by a morally bankrupt political decision-making system that runs more in accordance with the rhythms of soundbytes and simplistic slogans.

Part this emerging consensus to cut back the federal deficit stems from a flawed belief that the debt of the federal government is economically the same as private debt — i.e., household debt, the debt of non-financial businesses, and the debt of private financial institutions.  Even if this were the case, the chart below shows unequivocally that, by far, the largest debt-related problem in the US economy is the unprecedented growth in private debt since 1981, triggered in large part by the deregulation of financial institutions, which began with election of Ronald Reagan and was power boosted in the last years of the Clinton Administration. 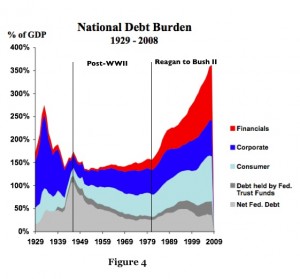 A deflation of private debt through liquidation and bankruptcy, like that which occurred during the Great Depression in the 1930s, is by far the most dangerous threat now facing the US economy.

Already, the down tick in the most recent data in the figure are hints that that private debt is being cut back, and as is clear from press reports, many economists are concerned that consumers are retrenching and businesses are not borrowing, and that this could drag the economy into a double dip recession or worse.  That possibility leaves only two other options for expanding the economy and creating jobs: either through a massive expansion of exports (going from a negative to a positive trade balance — not likely, given the horrendous collapse in the trade balance and the extreme degree of deindustrialization that has taken place since Ronald Reagan took office in 1981) or via direct job creation by a Keynesian policy to increase government spending.

Moreover, given the high levels of private debt and the virtual certainty of at least some consumer retrenchment, it is quite likely that the so-called Keynesian multiplier will be smaller than usual and that the overall stimulative effects per dollar of spending (or per dollar of tax cuts) would be lower than normal (via a decreased marginal propensity to consume in the private sector), which would imply a larger stimulus might be needed than would otherwise be the case — assuming of course, there emerges a political consensus to stimulate the economy via direct spending.

But now that they have bailed out the big banks, politicians are moving in the opposite direction toward a consensus to cut back on deficit spending.  Obviously, this would put a drag on the struggling economy, and paradoxically, could through the triggering of more automatic stabilizers (increased unemployment insurance, reduced tax intakes, increased welfare expenses, etc) and actually work to increase the deficit, in any case.  Moreover, slower or decreased growth in the economy would increase pressure to liquidate private debt through bankruptcy, thus magnifying the self-reiforcing pressures for a sharp debt deflation and depression.

Bear in mind that the emerging consensus to cutback Federal spending in a time of economic crisis has its source in an economic belief that conflates federal debt with private debt in economic terms.  Even if this were the case, which it is not, the emerging consensus is based on the clearly mistaken notion that the the central debt-related problem in the US economy is government debt, when in clear point of fact it is the explosive growth in private debt that took off with the successive waves of deregulation, beginning in the 1980s.

But, is it necessarily the correct to view federal debt as just another form of debt, as politicians are wont to do?  This is a question that should be front and center in our nation’s economic debate.

The answer to this question is complicated by the nature of fiat currency (a paper currency not tied to a gold standard).  Moreover, the US government, unlike countries in the Eurozone, has sovereign control over its currency, which is merely a medium for economic exchange.  This makes the debtor situation of the United States fundamentally different from that of the private individual or corporation which uses that money, but has no control over its store of value.  My good friend Marshall Auerback has been arguing for many months that the peculiar nature of a sovereign currency makes the burden of public debt and national solvency very different economically from the burden of private debt and private solvency, and if he is right, that has enormous implications for economic policy.  He addresses that issue in the attached essay.