Colombia: The Constitutional Court yesterday declared an agreement granting US military access to Colombian bases unconstitutional on procedural grounds. La Patilla reported the vote was 6-3 against the agreement, and Semana reported the court would soon give a press conference to explain the details. The constitutional court ruled the 2009 accord should be redrafted as an international treaty and sent to Colombia’s Congress for approval.

The agreement would have allowed US forces to have access to seven Colombian bases that help support operations against drug trafficking and terrorism. This is the draft legislation that other Latin American leaders criticized lat year because it abetted a rise in US regional influence.

The deal agreed by former President Alvaro Uribe in October 2009 gave the US access to the bases for 10 years and would see a maximum of 800 US military personnel and 600 civilian defense contractors based in Colombia.

The court’s chief justice Mauricio Gonzalez said the deal was “an arrangement which requires the State to take on new obligations as well as an extension of previous ones.” He said that as such, it should be “handled as an international treaty, that is, subject to congressional approval”. The court did not rule on the legitimacy of the agreement itself and the ruling does not mean the US has to leave the country altogether.

NIGHTWATCH Comment: President Juan Manuel Santos said the court ruling will have little impact on U.S. military help fighting rebels and will not affect the operations of U.S. troops and contractors working with Colombia’s military, The Associated Press reported 18 August.  The ruling is primarily procedural not substantive. Nonetheless, it will be an inconvenience. 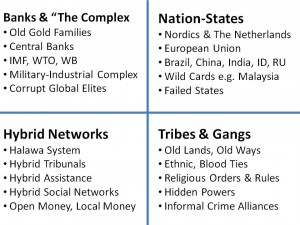 Phi Beta Iota: Here is a rough graphic showing the four spheres of influence that are fighting World War III.  Nations are flexing their Constitutional muscles against US and external incursions, while at the same time, hybrid organizations and “hidden powers” are fighting in the shadows.  Most Nation-States are no longer central because they have lost its legitimacy from a mix of internal corruption and external misadventure.

It is neither possible nor desireable to “fight” the established powers–Non-Zero Strategy requires a focus on the five billion and the creation of infinite wealth with social capitalism and Information Communication Technologies (ICT) as well as energy, food, and other innovations.  Non-violent innovation is the only viable winning strategy.