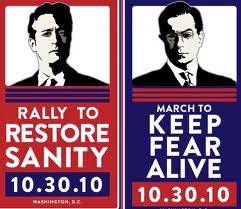 Thousands to Voice Frustrations at Stewart and Colbert Rally

Those Planning to Attend Fed Up By American Politics, Want to Laugh

From across the country – and Canada – thousands of supporters are expected in Washington to attend Jon Stewart and Stephen Colbert’s “Rally to Restore Sanity” and “March to Keep Fear Alive” this Saturday.

More than 220,000 people have RVSP’d that they are attending on the event’s official Facebook page. The National Park Service application, however, only estimated 25,000 people would attend the event, which is scheduled to last from noon to 3 p.m.

The rally is billed as a chance for people to voice their frustrations with American politics and the media, and, of course, be entertained.

“I don’t think people are going to the rally because they are liberal or conservative,” Wilford said. “It’s not about political ideology, but about the way politics are being sold.”

“I personally have been frustrated with what I view as a lot of hypocrisy in politics,” Miko Wilford, a 24-year-old psychology graduate student from Iowa State University said. “I feel ‘The Daily Show’ and the ‘Colbert Report‘ do a good job of pointing out the hypocrisies.”

“I think it’s time we restored truth and civility in this country. Our politicians need to acknowledge that this generation is beyond right-left categories.”

“The rally appeals to me because I agree with the underlying premise, that the tiny percentage of people screaming at each other on television should not be the only voices we’re paying attention to,” said Alexis Sigger, a 32-year-old television producer who is coming from Brooklyn for the rally.