Half of U.S. nuclear reactors over 30 years old

NEW YORK (CNNMoney) — Half of the nation’s 104 nuclear reactors are over 30 years old, according to the U.S. Nuclear Regulatory Commission. Most of the remaining reactors are at least 20 years old.

Originally granted licenses to operate for 40 years, most of the country’s reactors have applied for a 20-year extension. Sixty-two extensions have been granted so far, and 20 are still pending, according to the industry group the Nuclear Energy Institute. 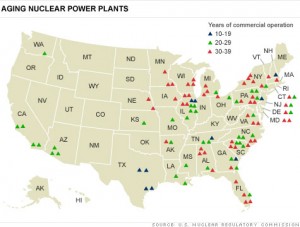