Memorandum for the Vice President

Old ideas and documents below the line.

This is the Cabinet, OSD, Major Command, and Congressional-level access point for staff on the Open Source Agency.  Five people have been fighting for this for 20 years, “against all odds.”   Crisis Mappers and Humanitarian Technologies are the shallow end of the Alternative C2 that NATO and White SOF have been seeking.  The time has come to establish an Open Source Agency (OSA) under diplomatic auspices (see reasons below) with non-reimubrsable funding from, and operational control by, OSD.  It will provide everything to the high side in near real time, but it will be autonomous, with transparency, truth, and trust as its contribution to the public interest and to Whole of Government strategy, policy, acquisition, and operations.  It will be the proponent for Open Source Everything (OSE — the technical solution) and Multinational, Multiagency, Multidisciplinary, Multidomain Information-Sharing & Sense-Making (M4IS2 – the human solution).

Here is the memorandum version of the new beginning below, suitable for staffing:

Here is the memorandum prepared for circulation within NATO, and published by NATO Watch:

Since at least 1969 CIA’s own analysts have been calling for an Open Source Agency (OSA) that could acquire, exploit, and collaboratively make sense of multi-lingual multi-cultural, multi-media information that is not secret, not online, and not in English.  At the same time, experienced critics of the secret intelligence system have for decades been pointing out, in cleared books and briefings, that the secret world does not do Global Coverage; cannot compare and contrast US domestic and foreign threats, challenges, and change; and generally produces classified information rather than decision-support, while lacking any semblance of focus on the distinct needs of those responsible for strategy, policy, acquisition, and operations, or those outside the immediate national security community who are the most vital players in Stabilization & Reconstruction as well as “Anticipatory Governance.”

As DoD faces increasing challenges around the world, the theater commanders, both regional and functional, are all confronted by the reality articulated by General Tony Zinni, USMC (Ret), then Commanding General of the US Central Command: he received, in his words, “at best” 4% of what he needed from secret sources and methods.  He had to scramble for the rest – the other 96% — and generally had no established sources and methods – or budget – for exploiting international – foreign – commercial intelligence offerings (not to be confused with US vendors offering cleared US citizens as “butts in seats).”

The need for sustainable local ISR is urgent — not only to support operations, but also to inform strategy, support policy, and influence technology development.  Furthermore, it must be inherently open and suitable for transparent multinational dialog across all forms of organization, not only governments and their militaries.


An Open Source Agency (OSA) is included on pages 23 and 413 of the 9/11 Commission Report, and has been pre-validated as recently as 2010 by OMB senior staff provided a Cabinet officer proposes the OSA.

This memorandum outlines an immediately implementable plan, program, and budget for creating the OSA as a service of common concern (Whole of Government), with the National Defense University (NDU) as its Initial Operational Capability (IOC) location, and the South-Central Campus adjacent to the Department of State and the US Institute for Peace as its Full Operational Capability (FOC) location.  The establishment of the OSA will have an immediate positive impact on a wide variety of Presidential programs, while radically enhancing the availability of ethical evidence-based decision support to DoD strategy, DoD acquisition, DoD policy, and DoD operations.  In relation to Africa and other “lower tier” areas, the OSA will immediately begin providing decision-support to Whole of Government, and for the first time allow a fully-informed inter-agency and multinational dialog on planning, programming, and budgeting for all Africa, all Americas, all Asias.

FINDING 01: The secret world is optimized to do very expensive technical collection against hard targets.  While it has adjusted its focus in recent years, it still does not process most of what it collects, and it still does not do Global Coverage, nor does it do Human Intelligence (HUMINT) or Open Source Intelligence (OSINT) to the degree necessary across 183 languages we neither monitor nor comprehend.

Reference: 2009 Human Intelligence: All Humans, All Minds, All the Time

FINDING 02:  As anticipated by General Al Gray, USMC, then Commandant of the Marine Corps, and Robert Steele, then the second ranking civilian in Marine Corps Intelligence and the founding senior civilian of the new Marine Corps Intelligence Activity, 80% or more of the threats, challenges, and changes are emergent, unconventional, non-state, dynamic, and in essence, not what the existing US intelligence systems is able to collect on or analyze, and not what the US military is trained, equipped, and organized to deter, contain, and neutralize.

FINDING 03:  90-95% of the source and methods required to orient, observe, decide, and act in relation to 8 out of the 10 high-level threats to humanity are open.  Open Sources, Open Methods.

Reference:  2012 Foreword to Book on Public Intelligence for Public Health

FINDING 04:  The existing culture, legal structures, operational mind-sets, technical disposition, and highly-classified proprietary systems used by the classified world to exchange information with those privileged to receive it, are unaffordable, not interoperable, and unscalable to the rest of the world including NATO, the PfP, the Mediterranean Dialog Nations, and the many global associates now interacting with NATO.  An Open Source Agency will BOTH reinforce the secret world AND meet all the needs that the secret world cannot and will not meet.

FINDING 05:  There are eight information “tribes” relevant to gaining access to all relevant information, particularly cultural, historical, linguistic, and local information, most of it not online, not in English, and very often not published at all — only direct amicable open ethical human engagement is adequate to this challenge.  The eight tribes are the academic, civil society including labor and religion, commerce especially small business, government especially local, law enforcement, media, military, and non-government/non-profit.  Our focus is on sharing the green among individuals, organizations, and nations.


Reference:  2002: New Rules for the New Craft of Intelligence

FINDING 06:  In a collapsing fiscal environment there is a remarkable convergence of need among NATO, White SOF (Stabilization & Reconstruction), the regional theaters, Homeland Security, and Whole of Government — everyone needs affordable, sustainable, shareable ISR that the secret world cannot provide.  The OSA as planned includes a Multinational Decision Support Centre with globally-distributed regional and national nodes hosted by the respective militaries.


Reference:  2009 Intelligence for the President–AND Everyone Else 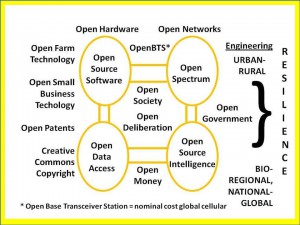 FINDING 07:  An Open Source Agency (OSA) as conceptualized below, provides both the technical and the human solution to the challenge of sustainable local ISR (global coverage, “two levels down” from state to non-state and neighborhood).

STEP 01:  Form the Planning Cell.  The axis of greatest need lie with NATO/EUCOM, SOCOM, and AFRICOM/CENTCOM closely followed by SOUTHCOM and PACOM.   General Breedlove and Admiral McRaven must understand what has been withheld from them by a mix of staff ignorance and deliberate domestic enemy action.  OSD/NDU and NORTHCOM as well as State, Commerce, Energy, and others should be in the room.  Think in terms of pilot projects in DC, Norfolk, Tampa, Miami, and Naples.

STEP 02:  Meet with OMB Principal Senior Staff (Program 50, Program 150).  Agree on the outlines of a Presidential Initiative evenly divided between foreign national security and domestic education and employment objectives, to be funded by DoD, under diplomatic auspices as a sister agency to the Broadcasting Board of Governors, but with absolute autonomy as a dual direct report to the Director of OMB.  Consider legislation.

Steps 03 through 07 are available from Robert David STEELE Vivas in person.

An Open Source Agency funded at $125 million for a first year, going toward $2 billion at at full funding, has been approved by the Office of Management and Budget senior staff, with one requirement: that the Secretary of State ask for it.  A single letter from the Secretary of State to OMB will yield $25 million in end of year money, and a new presidential initiative at $125 million from 1 October 201N.  The OSA will over time help justify the redirection of up to $100 billion from Program 50 (Military) to Program 150 (International Affairs).

First recognized as a need in 1969, prominently addressed by the Aspin-Brown Commission, the WMD Commission, and various other studies, the Open Source Agency appears on pages 23 and 423 of the 9/11 Commission report, as a proposed secret agency, which is completely contradictory to the need and the reality that the secret world cannot do open source with integrity.  OMB agrees that the Open Source Agency should be a sister agency of the Broadcasting Board of Governors (BBG), both under the arms-reach auspices of the Undersecretary of State for Public Diplomacy.  Stated in relation to the President’s needs at this time, the Open Source Agency would enable the Secretary of State to contribute immediately and forcefully to Open Government, Citizen Engagement, Participatory Budgeting, Global Engagement, and more tangibly, to a national jobs retraining program for all those unemployed who need to retrain for the Information Era jobs market. A one-page draft legislative outline and a two-page synopsis are below, along with two graphics.

*  Joe Markowitz and Robert Steele have briefed OMB, and OMB agrees, that the OSA should be under the Department of State, or failing that, under another non-intelligence Cabinet-level authority.  While the Department of Commerce and the General Services Administration (as well as OMB itself) are possibilities, the legislative outline continues to focus on the Department of State as the parent and host.  The addition of the OSA to pages 23 and 423 of the 9-11 Commission Report was a hard-fought victory for the one CIA SES with ethics present, but was corrupted in its association with CIA and the secret world by the others present, who knew/know nothing of open source (they call it “open sores”).

The OSA will NOT be under the secret world, but it WILL provide the secret world with real-time feed of all raw open sources and all finished open source intelligence on a “first among equals” basis.  By being outside the secret world, it will be able to provide shareable decision support to Whole of Government, Stabilization & Reconstruction, state & local, and multinational, multiagency, multidisciplinary, multidomain information-sharing & sense-making (M4IS2).

Graphic: Four Forces After Next with IO

Graphic: One Vision for the Future of Microsoft

Graphic: The New Craft of Intelligence

ON INTELLIGENCE: Open Letter to the President

Memorandum: Creating a New Agency with a New Mission, New Methods, and a New Mind Set

Aspin-Brown Commission:  “severely deficient,” should be “top priority” for funding and for DCI attention.

Reviews of Books by Others:

Review: The World Is Open–How Web Technology Is Revolutionizing Education

2010 Human Intelligence: All Humans, All Minds, All the Time

Campaign for Liberty: Steele on IC and DoD

Books on the Larger Context:

2006 THE SMART NATION ACT: Public Intelligence in the Public Interest

2006 INFORMATION OPERATIONS: All Information, All Languages, All the Time

2000 ON INTELLIGENCE: Spies and Secrecy in an Open World

The Failure of 20th Century Intelligence:

About Robert Steele, Primary Proponent for OSINT in support of Whole of Government and and Multinational, Multiagency, Multidisciplinary, Multidomain Information-Sharing and Sense-Making (M4IS2):

2001 The New Craft of Intelligence

2000 Spies and Secrecy in an Open World