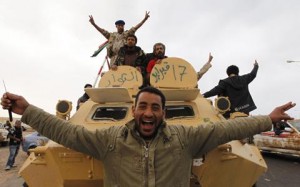 Phi Beta Iota:  This March 30 article continues to be one of the best available.

Who Are the Rebels Fighting Libyan Government Forces?

But experts are wondering who is this opposition and who are the rebels fighting Ghadafi’s forces?

Marc Ginsberg, former U.S. Ambassador to Morocco, says the Libyan opposition is made up of different personalities and groups.

“It’s a sort of ‘Star War’ assembly of characters and people who are clearly patriots, very decent people – I’m sure – journalists, opposition military officials who have broken with the regime, former diplomats – and then you’ve got Islamists,” said Ginsberg. “The Benghazi section of Libya was basically an opposition stronghold to Gadhafi and it has a very strong Islamist character to it. So while there are very good people who are part of this opposition coalition, we really can’t say that we know for sure what their capacity is to govern Libya.”