If you’ve noticed a lack of Ron Paul in the mainstream media’s coverage of the 2012 presidential race, it might not be an accident. After he placed first in a Fox News poll, the outlet has removed the results from their website without explanation.

Fox had launched an online poll to gauge readers’ opinions on last night’s Republican show-down and asked their audience, “Which GOP presidential candidate do you think won the Fox News/Google debate?” At one point Paul placed in first, with 30 percent of the votes, but a reader of Infowars.com has pointed out that the poll has disappeared from the website, or has been shuffled to another page far from the front of Fox’s political coverage. 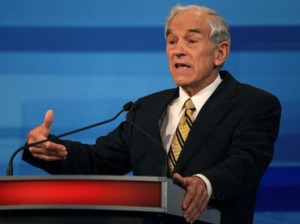 Logging onto the poll now produces an error in which the user is told “No content item selected.”

A screen shot of the poll produced by Infowars shows that Paul led with 24,8945 votes, with Mitt Romney trailing in second place with 22,656 votes, of 27 percent of the total. Rick Perry placed third with 15 percent of the votes, followed by Herman Cain with 9 percent.

Speaking from the stage during last night’s debate, Paul reminded the audience that he has been placing quite well in most surveys as of late. The mainstream media, however, continues to ignore him, despite pleasant polling.

When quizzed during last night’s debate from Orlando, Florida on whom he might consider as a running mate, Paul deterred the question and noted that he wouldn’t bother selecting anyone until he made it in the “top two.” In the meantime, Paul said, he was running in third in most national polls.

The mainstream media continues to overlook Paul, however, favoring Rick Perry and Mitt Romney as the frontrunners, and unexplainably offering more airtime to Michele Bachmann. Speaking to CNN yesterday, former presidential candidate and long-time activist Ralph Nader said he thought Paul was perhaps most appealing of the current GOP candidates.

“He wants to get out of these wars overseas, he wants to bring the soldiers back, he wants to cut the bloated military budget, he wants to change some of the anti-civil liberty provisions in the Patriot Act, he hates corporate welfare an all these bailouts of Wall Street crooks,” said Nader. “He ought to get more attention, instead of ten times more attention being given to Michele Bachmann.”

A USA Today/Gallup poll released on Tuesday put Paul as the number three candidate in the GOP race, receiving nearly three times the favor of Bachmann. In New Hampshire, where the first primary of the 2012 race will take place this winter, Paul came in second place, between Mitt Romney in first and Jon Huntsman in second.

Phi Beta Iota:  Amidst strong rumors that Ralph Nader may endorse or even run with Ron Paul on an Independent ticket, there is clearly an emerging appreciation for the integrity that Ron Paul has consistently demonstrated over his career.   Russia Television (RT) has replaced the BBC (which is subsidized by the CIA) as the international source of choice and we note with interest that their coverage of Ron Paul is vastly better than anything to be found out of the US or UK.