Google-funded Code for America was in Austin Saturday for a codeathon using data accessible via the city’s data portal. I dropped by the geek chic coworking facility Conjunctured, where the codeathon was happening, and hung out long enough to get a sense of the projects the ~40 coders were tackling. Those included a Bike Accident and Route Safety app, an app for finding miscellaneous stuff around town, and a “garden dating” app (to help people who want a community garden find a space). What was missing? For at least one project (Find It), there were fewer sources of data than the developers would’ve liked. I realized that it’s not enough to bring coders together to create apps – we should also be cultivating data sources. A project to build databases and facilitate citizen input would be a logical complement to the various codeathons. 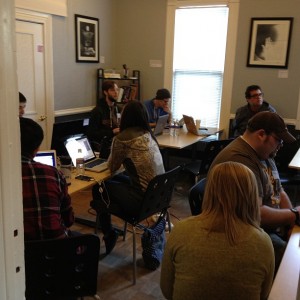 Phi Beta Iota:  Google is much more predatory than people realize.  Any serious long-term endeavor must be completely open source and avoid Google like the plague–it comes with harm built in.  The most exciting initiatives, generally lacking even the most basic funding, seek to combine Open Data Access, Open Source Hardware, Open Source Software, and Open Spectrum.  That will lead to an Autonomous Internet and to holistic public intelligence with integrity.