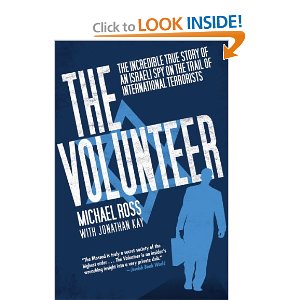 For the 50% that is authentic, a solid four stars. I found the book engrossing even if tedious in parts. For a professional — and particularly for someone starting out in spying, I absolutely recommend this book as required reading, along with the ten others linked below.

25% of the book is disinformation, generally everything dealing with how Israel does not spy within the USA, avoiding the reality that Israel knew in advance about 9/11 (to the point of sending a crew from Israel to video the event). From the USS Liberty to Israelis selling drugs and surveilling US Dreug Enforcement Agency (DEA) and other US government elements in the USA, to the persistent and pervasive use of “sayonim” or “helpers” from the US Jewish community (44% of Jews world-wide, 41% being is Israel), this book is blatantly misleading and no doubt also approved by the Mossad in pre-publication review.

25% of the book, mostly by omission, is a result of compartmentation and the proper isolation of the author in his work (non-official cover officers are even further out of the loop than inside case officers)–this is not a book that covers the various elements of the spy work including analytics and such.

Let there be no doubt that I have personally met the author, consider him both credible and honorable, and vouch for his ability to teach Americans, among others, what Americans do not know how to do: create and use non-official cover.

Now here are ten other books I recommend, half on Israel as a threat to the USA, the other half on the tradecraft of intelligence.

Israel as a threat (as are France, Germany, and others, the Israeli’s have to deal with the Zionists)
The Attack on the Liberty: The Untold Story of Israel’s Deadly 1967 Assault on a U.S. Spy Ship
The Power of Israel in the United States
Robert Maxwell, Israel’s Superspy: The Life and Murder of a Media Mogul
By Way of Deception: The Making of a Mossad officer
Friendly Spies: How America’s Allies Are Using Economic Espionage to Steal Our Secrets

Books useful to the larger tradecraft picture:
Without Cloak or Dagger: The Truth About the New Espionage
The Game of Nations: The Amorality of Power Politics
Denial and Deception: An Insider’s View of the CIA
Spymaster: My Life in the CIA
The Human Factor: Inside the CIA’s Dysfunctional Intelligence Culture by Jones, Ishmael published by Encounter Books Paperback

There are so many other books in the intelligence field, below is my easily found master list with links to every reviewed book’s Amazon page:

Best wishes to all,
Robert David STEELE Vivas
ON INTELLIGENCE: Spies and Secrecy in an Open World