Douglas Rushkoff has been an authority on the intersection of technology and culture since before the word “google” was anything more than baby talk. He predicted the coming centrality of the Internet (CYBERIA, 1992 – a book initially canceled by a publisher who feared the net would be over by the time it came out); he coined the terms “viral media” (MEDIA VIRUS, 1994) and “social currency” (Upside Magazine, 1996); he forecasted the collapse of the dotcom bubble (SXSW, 1997) and the most recent recession in a 2004 column that later became his book, LIFE INC; he even inspired today’s code literacy movement (PROGRAM OR BE PROGRAMMED, 2010). He is the author of a total of twelve bestsellers (translated to over thirty languages), the host of three award-winning documentaries, an award-winning educator and frequent media commentator.

ROBERT STEELE:  I consider this one of the most brilliant offerings of the era. I am friends with Alvin Toffler and also Doug Rushkoff, and being familiar with both, I would say that Present Shock is the equal of Future Shock, and Doug is doing for all of us what Alvin and Heidi did for us in the past. This is deeply important “stuff.” 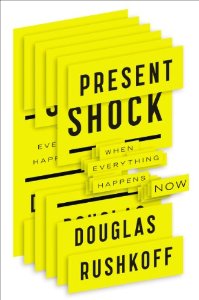 An award-winning author explores how the world works in our age of “continuous now”
Back in the 1970s, futurism was all the rage. But looking forward is becoming a thing of the past. According to Douglas Rushkoff, “presentism” is the new ethos of a society that’s always on, in real time, updating live. Guided by neither history nor long term goals, we navigate a sea of media that blend the past and future into a mash-up of instantaneous experience.
Rushkoff shows how this trend is both disorienting and exhilarating. Without linear narrative we get both the humiliations of reality TV and the associative brilliance of The Simpsons. With no time for long term investing, we invent dangerously compressed derivatives yet also revive sustainable local businesses. In politics, presentism drives both the Tea Party and the Occupy movement.
In many ways, this was the goal of digital technology—outsourcing our memory was supposed to free us up to focus on the present. But we are in danger of squandering this cognitive surplus on trivia. Rushkoff shows how we can instead ground ourselves in the reality of the present tense.

Winner of the first Neil Postman award for Career Achievement in Public Intellectual Activity, Douglas Rushkoff is an author, teacher, and documentarian who focuses on the ways people, cultures, and institutions create, share, and influence each other’s values. He sees “media” as the landscape where this interaction takes place, and “literacy” as the ability to participate consciously in it.

All of his books are strongly recommended.