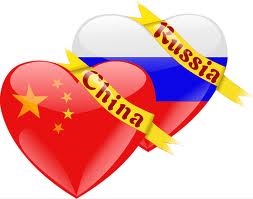 “When meeting with Prime Minister Dmitry Medvedev on Saturday, the Chinese leader said that in recent years, the China-Russia relationship has withstood the tests of changing international circumstances and made substantial progress.”

“He added that there is a greater need now for the two nations to deepen their comprehensive strategic partnership of coordination as the world has seen continuous profound changes.”

Comment: Xi has spoken about the ‘new situation.” His visit to Moscow has helped clarify that the Chinese leadership perceives Russia as China’s strategic partner in the “new situation.” Coping with changes in the world is a persistent theme in Xi’s remarks on foreign affairs, whether at the National People’s Congress or during his Moscow visit. It is a prominent theme in the coverage of President Xi’s remarks by Chinese official media.

The US has been urging China to play a steadily larger role in international relations since the time of Deng Xiaoping. Early in his presidency, Xi is showing that China now is prepared to play that role, but with Russia.

At the Moscow State Institute for International Relations. Xi’s most important remarks were made to Russian foreign affairs scholars, Russian students of Chinese, and analysts. He essentially challenged US and Western leadership. (NightWatch added the emphasis to the Xinhua report.)

“Speaking to an audience at the Moscow State Institute of International Relations on Saturday, Xi said Russia and China, as each other’s biggest neighbors, have a lot in common on national development.”

Comment: Even allowing for hyperbole, these statements signify that the Chinese leadership has concluded that China and Russia are the guarantors of strategic balance in the new situation — presumably against the US and its allies. They also are the guarantors of world peace and stability, which by implication they judge the US does not promote. This is a very China- centric world view that anticipates the end of the era of US world dominance in the foreseeable future.

His statements, as carried in English translation in Chinese official media, portend that the US may expect to encounter pushback from China on key issues. On strategic issues, Xi’s statements imply a predisposition to side with Russia against the US in order to maintain strategic balance. On regional issues — such as Syria and Iran and even North Korea, they imply a warning that China will not cooperate with the US if cooperation jeopardizes peace and stability from China’s perspective.

It is not clear from Russian coverage that the Moscow leadership is fully in step with the Chinese leaders, but President Putin said the two countries hold a similar stance on many major issues and enjoy extensive common interests and bright cooperation prospects.

Xi and Putin signed a joint statement on “deepening the bilateral comprehensive strategic cooperative partnership,”which  laid out the priorities of future bilateral cooperation and called for a “new type of great-power relations in the international arena.” Russia and China also reached agreement on energy and defense ties.