“Stop The Cyborgs” is a new site that attempts to bring a balanced trepidation to the unbalanced idea that we’ll all be walking round with Google’s outer brain strapped to our faces.

The opposition will congregate in dark corners.

They will whisper with their mouths, while their eyes will scan the room for spies wearing strange spectacles.

The spies will likely be men. How many women would really like to waft down the street wearing Google Glass?

It won’t be easy. Once you’ve been cybernated, there’s no turning back. Which is why the refuseniks are already meeting in shaded corners of the Web.

One site is called “Stop The Cyborgs.” It claims to be “fighting the algorithmic future one bit at a time.” 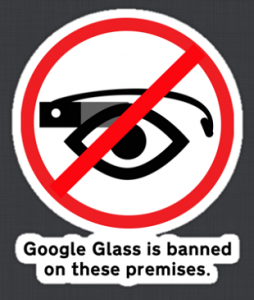 It’s going to take a lot of bitty fighting, but the people behind this site — they’re naturally anonymous, in an attempt to stop Google spying on them — say they’re fighting Google Glass in particular.

They say that it will herald a world in which “privacy is impossible and corporate control total.”

Some would say that, thanks to Googlies and other bright, deluded sparks, we’re there already. The Lord and Master Zuckerberg explained to us a long time ago that he knows us better than we do and that we don’t actually want privacy at all.

Still, the people behind this anti-cyborg movement claim that there’s no way you’ll ever know that someone wearing Google Glass is recording your every word and movement.

There’s no way of even knowing if someone else is recording you through their glasses from somewhere in the cloud.

And how are we, whose egos are already more fragile than a porcelain potty, supposed to feel when we know that a glasses-wearer has one eye on us and another on our Klout score or teenage sexting pictures?

The site explains: “Gradually people will stop acting as autonomous individuals, when making decisions and interacting with others, and instead become mere sensor/effector nodes of a global network.”

Well, yes. But isn’t that the precise dream of those who want their engineering to finally prove that humanity is a deeply inferior species?

They are, of course, right. We aren’t intelligent enough to see that “artificial intelligence” can’t possibly be as much fun as the real intelligence that is creating it.

Still, those whose intelligent pleasures reside in online shopping will be overjoyed that there is a “Stop The Cyborgs” store.

There you can buy all sorts of goodies to protest your coming psychological annihilation.

There is hope for these clearly human anti-cyborgians, though.

There’s an even greater hope: global warming might destroy us first.

2012 Robert Steele: Reflections on Data as the New Oil BUT No One Is Serious About Holistic Analytics, True Cost Economics, Machine or Man-Machine Translation, or M4IS2

Patrick Meier: Crisis Mapping, Neogeography, and the Delusion of Democratization