Governor to Boston Area: “Shelter in Place”. Here is a Better Way

“Shelter in Place” is a phrase dreamed up by US Homeland Security.

Now that the precedent has been set, we’re going to hear this phrase with ever greater frequency and duration.  Governors that don’t take this step in the future will suffer political and legal blowback if they don’t.

It’s already become a common phrase in the Boston metro area. The governor of Massachusetts has already issued the “shelter in place” order twice this year.

The first order was given before a huge snowstorm that hit the Boston area earlier this year.  The second time was during the manhunt for the Boston Marathon Bombers.

It definitely works as a way to clear the streets.  Here’s a Twitter pic of what Boston area streets looked like during rush hour:

However, over the long run, I believe this phrase is going to look as silly as “Duck and Cover” does to today’s world. The reason is simple.  As the number of disruptions increase, we’re going to face a choice.  We can either stay under constant lock-down, or we can become resilient. 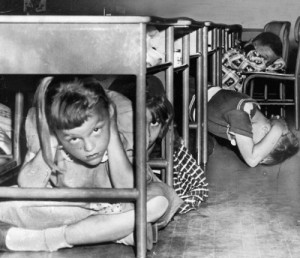 That makes the choice simple:  Resilience.

Resilient communities don’t shut down due to security/food/energy disruptions. They can self-generate much of that themselves. Often at levels of quality better than what is available from global sources.

When terrorism and unrest occurs, resilient communities can maintain security, even if they are helping to neighbors in need.

In sum, resilient communities don’t shut down and cower when the going gets tough.

They are the first responders.

Some food for thought.

Phi Beta Iota:  After hearing and reading about 25+ Virginia Tech students standing around like sheep while one shooter reloaded, we developed the term “Rush & Crush” as the modern equivalent of the old “Duck & Cover,” but this concept real and useful.  The era of micro-management is coming to an end.  It appears the elite want to take it just as far as they can without giving any thought to what happens when it all implodes.  As an additional note, Shelter in Place is essentially meaningless because an armed individual can easily penetrate any given potential home, kill everyone inside, and “camp out” until the martial law ends.  The next idiot step will be the concept of house to house mandatory searching, after which the government will fabricate a threat to justify  SIP & Search whenever they wish to probe a specific neighborhood.  The USA is as far away from the vision of the Founding Fathers as it could be.  We pray that 2014 and 2016 will bring corrective balance.

2011 Thinking About Revolution in the USA and Elsewhere