Islamabad, Nov 23: Pakistan on Saturday closed its border with Afghanistan ahead of protests against US drone attacks, official sources said. Thousands of people will begin a protest sit-in on the main NATO supply route in Peshawar, the capital of Khyber Pakhtunkhwa province, later on Saturday. Pakistan Tehrik-e-Insaf (PTI) or Justice Movement, which rules the province, has announced it will close the supply line for NATO troops in neighbouring Afghanistan as part of its anti-drones protest strategy. Cricketer-turned-politician Imran Khan, who leads PTI, said the protest will continue unless the US stops drone strikes.

Protest rallies outside the US embassy and UN mission in Islamabad have also been planned in the coming days, said Shah Farman, spokesman for the provincial government. The authorities closed the main border point of Torkham with Afghanistan ahead of the protest over security concerns, officials said. It is one of the two main border points used for NATO supplies. Officials say nearly 70 percent of supplies for thousands of foreign troops are transported through Pakistan. The police in Peshawar Saturday blocked “Ring Road”, the route NATO containers use to head to Afghanistan. Officials said hundreds of police personnel were deployed in the city to tighten security in Peshawar and surrounding areas. Experts from the Bomb Disposal Squad also visited the venue of the sit-in and searched the area. PTI chief Imran Khan would speak at the rally and announce the future protests strategy, organisers said. The protest was planned after the Nov 1 drone strike in North Waziristan which killed the Pakistani Taliban chief Hakimullah Mehsud just a day ahead of a meeting between a government-led team and the Taliban. Pakistan accused the US of sabotaging the peace process with the Taliban. The US expanded its drone campaign and rained missiles on a religious school in a non-tribal district of Hangu Nov 21 and killed six students and teachers. IANS

New story with photos and maps, and PBI comment, below the line.

Phi Beta Iota: As NIGHTWATCH pointed out recently, the government of Khyber-Pakhtunkhwa Province of Pakistan has vowed to close the Khyber Pass to NATO in reaction a US drone attack in the province this week. Chief Minister Imran Khan said his provincial administration will blockade the pass to all NATO traffic. At the same time, this very week, President Hamid Karzai in Afghanistan has refused to sign the Bi-Lateral Security Agreement (BSA), stating three pre-conditions for reconsiderating his position, one of which is that the US not interfere with the peace process. This is almost certainly a reference to US drone strikes against Taliban leaders, as well as US interception of insurgent leaders inside Afghanistan who are in dialog with the government of Afghanistan. What is the end-state desired in 2015? The diplomatic end-state? The information end-state? The military end-state? The economic end-state? (DIME). Could it possibly be that NATO wants, but has not properly conceptualized, good diplomatic relations; a strong Afghan education and intelligence and research network; the US as the primary military sponsor for training and equipment including military sales to the Afghan armed forces (instead of India, Turkey, China, and Russia); and economic front runner position in exploiting Afghan minerals and building Afghan infrastructure? A strategy to achieve the above four end-states should not be dependent on a single point of failure…nor should a theater campaign plan be vulnerable to uncoordinated drone attacks by an element of the US government that appears to operate far outside both US and international law — with impunity.

NEW STORY ADDED 25 November 2013 [we speculate that Saudi Arabia is partially behind all of this, with a new axis of evil between the out of control Pakistani military and its ISI, and Saudi wahhabist “outreach” elements interested in further destabilizing Central and South Asia.]

Thousands of demonstrators protesting US drone strikes in Pakistan blocked a main road Saturday in the Peshawar province used to transport NATO supplies to and from Afghanistan.

The protests was led by the Pakistan Tehrik-e-Insaf (PTI) party, which is led by Imran Khan, a former international cricketer now turned politician.

They were supported by their allies in the Khyber Pakhtunkhwa provincial government and they were also joined by the Jamaat -i-Islami (JI) and the Awami Jamhoori Ittehad (AJIP) political parties.

“We will put pressure on America, and our protest will continue if drone attacks are not stopped,” Khan told reporters reports RT News. 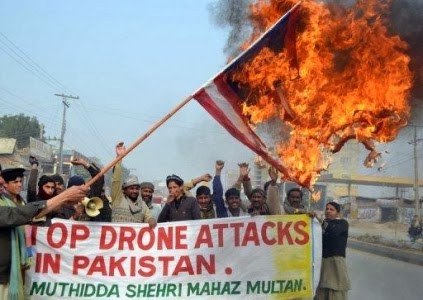 “We are here to give a clear message that now Pakistanis cannot remain silent over drone attacks,” said Shah Mehmood Qureshi, a senior member of the PTI, addressing the protesters.

Imran Khan has been a fierce critic of US drone attacks, arguing that they violate Pakistan’s sovereignty. Khan said that the Pakistani government is doing nothing to stop drone attacks except for issuing statements of condemnation and that the protest would continue indefinitely.

Khan stressed that NATO supplies would not be allowed to pass through Khyber Pakhtunkhwa, formerly called North-West Frontier Province, and added that the province’s PTI-led government had the mandate to block NATO trucks from passing through its territory.

Earlier Imran Khan had warned that NATO supply routes will be blocked if continuing US drone strikes in Pakistan threaten the country’s peace talks with the Taliban.

Party workers from the PTI and the JI travelled to Peshawar from across Pakistan and an estimated 10,000 people participated in Saturday’s protests. The protesters shouted anti US slogans such as “Stop drone attacks” and “Down with America”.

“I am participating in today’s sit-in to convey a message to America that we hate them since they are killing our people in drone attacks. America must stop drone attacks for peace in our country,” Hussain Shah, a 21 year old university student, told Dawn, Pakistan’s oldest and most widely read English-language newspaper.

American drones are performing regular extrajudicial killings of Islamist leaders, accompanied by the collateral damage of many civilian casualties.
.
Strict security measures were in place Saturday, with 500 police personnel on duty. Trucks were directed to use an alternative route, although Tahir Khan, a government official, said there was normally little NATO traffic Saturday as most of the trucks arrive by Friday night to clear the border crossing. 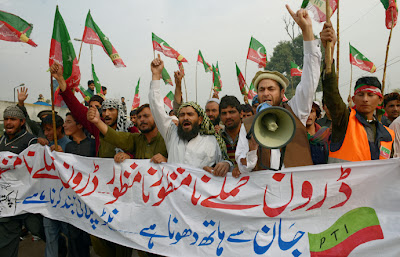 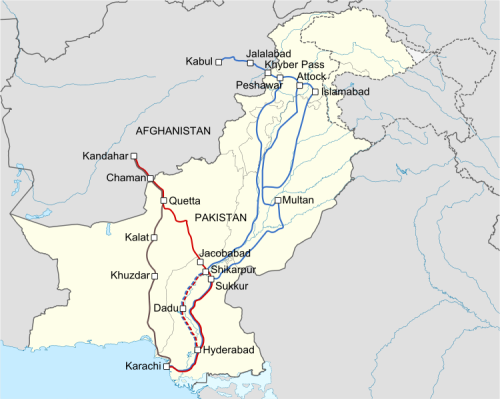