Cryptocurrency:  MtGox, the oldest and once-largest bitcoin exchange, appears to have a serious problem. Since about a week ago, clients’ bitcoin withdrawals have been deducted from their account, but the clients never received the money – the money withdrawn was effectively disappeared into thin air. The community is furious and as of now, MtGox has racked up over USD 38 million in such unfulfilled withdrawals.

MtGox was once the undisputed king of the hill among bitcoin exchanges. If MtGox froze its trading, which has happened, then bitcoin trading froze as a whole – the exchange was that dominant. In the past year, other exchanges have gradually sprung up, and today, MtGox accounts for about one-third of trade – it’s still a very strong player, even if not dominant.

MtGox has always had various regulatory problems transferring funds in and out of US Dollars, but according to client testimonies and reviews, other central-bank currencies – euros, yen – have always worked like clockwork. Since about a week back, though, withdrawals of bitcoin – the opposite of central-bank currency – from the exchange have started to fail in a seemingly random fashion.

When bitcoin funds are transferred, that normally happens instantly – the received sees the funds within seconds. That’s one of the strengths of bitcoin: you can transfer money, unlimited amounts of money, anywhere in the world instantly and unstoppably.

Since about a week ago, MtGox has not processed all requested bitcoin withdrawals and many clients have not received their bitcoins. Instead, some of the withdrawals were processed while the rest of the withdrawals remain frozen in an undetermined condition. Affected users are upset by this since the money is gone from their account, but the bitcoins have not been transferred to the client’s control. As of noon on February 4, The Gox Report has this chart, which is based on MtGox’ own internal data:

Note the bottom, the sum of all “failed transactions” (BADTX), which is technospeak for “withdrawals where the money is gone from the client’s account but where the funds were not actually transferred to the client”. The total of such withdrawals, a total that has been steadily climbing since about January 25, has now reached 41,390. That amount is in bitcoin, and each bitcoin is worth $934 by MtGox’s own rate, making the disappeared client money exceed 38 million US dollars. That’s not exactly small change. 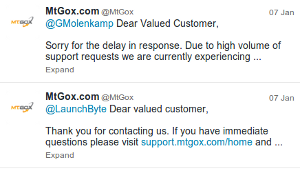 MtGox’ twitter account as of noon on Feb 4. It’s full of autoreplies, the newest response to a client being one month old.

Three years ago, I highlighted exchanges as one of four areas where the bitcoin community positively must improve to go mainstream. The above problem of the missing 38 million dollars is exacerbated by the fact that MtGox does not respond to clients’ questions until well over a week has passed, at which point a canned autoresponse is given. Additionally, there has not been any communication whatsoever about the ongoing problem. The lack of a phone number, the non-responses to client concerns over tens of millions of missing dollars, and the complete absence of messages about the situation does not make a professional operation.

Instead, clients of tens of millions of dollars are left on their own trying to figure out what is going on, if they’ll get their funds or not, and if so, when, and what the underlying problem could possibly be.

(I was recently asked by the Wall Street Journal in what ways MtGox failed to live up to Wall-Street-level professionalism, and declined to respond at the time. This is one of those ways. There are others, that are worse, that I have not published yet. That WSJ article concerned delays in withdrawals to dollars and euros, which could be explained by legacy-banking inertia; up until ten days ago, MtGox had executed bitcoin withdrawals perfectly.)

Looking at the bitcoin services forum, there are tons of complaints with the current exchange services. The entrepreneur should identify several opportunities here, just by looking at the front page of “discussions”, which read more like outraged complaints – mostly about MtGox.

As of February 4, clients are left speculating in these threads what the reason for this behavior is – whether it’s legitimate technical problems coupled with abysmal communication, deliberate fraud, possible insolvency, a technical attack on MtGox, or a number of other theories.

DISCLOSURE
The author is personally affected by MtGox’ behavior, having a six-figure dollar amount in such non-executed withdrawals. He considered Gox to be a safer repository for bitcoin than his own probably-hackable computer. That judgment may not have been accurate.

UPDATE: One hour after this article was published, MtGox broke the week-long silence with a statement saying little more than “we’re working on it”. In the statement, they also claim that the problem applies “primarily to large transactions”, a statement that doesn’t seem entirely correct when compared to client statements and testimonies on the bitcoin forums.