Weinstein scandal: What it tells us about celebs, politics & Hollywood

It is difficult to admit, but if we mustered the courage to see ourselves as we truly are, we would recognize that Harvey Weinstein is America, and America is Harvey Weinstein. Both are bloated, entitled, corrupt, bombastic, blindly ambitious bullies, full of fear and loathing, that use their outsized power to exploit the defenseless to indulge their darker impulses and insatiable desires. The sooner we recognize that, the faster we can try to change it.

Graphic of Pervert Weinstein and Other Links Below the Fold

The biggest open-secret in Hollywood was that Harvey Weinstein was a Grade-A pervert.  And his ‘coming out party’ this week is incredibly intriguing.  Hollywood is a dirty place. 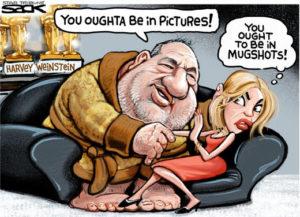 Phi Beta Iota: Harvey Weinstein, like Jeffrey Epstein and other major Zionists active with 1% circles, is at the intersection of treason, pedophilia, and fraud in all its forms. America has lost its moral compass. Zionist bribery, blackmail, and manipulation of all forms of information is part of why that has happened.

Steele, Robert, “World War III in the Middle East and the Need for Peace in Our Time: The Open Source Way — Beyond Iran, a US-NK Summit, Hollywood/Zionists Down, Global Re-Set,” American Herald Tribune, October 17, 2017.

The elites “have no credibility left:” (Chris Hedges)

The fall of Harvey Weinstein is the ‘Mid-Point Turn’ for this part of the story. The lid has been blown off the abuse cycle in Hollywood. Someone finally is going down for their crimes. The guy behind the outing is still in power and the dominoes will continue to fall.