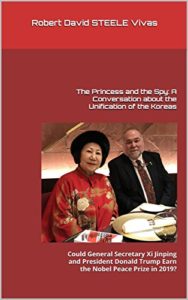 As I have previously reported, when I was in Japan in February meeting with Benjamin Fulford, he introduced me to a number of most interesting people, among them Princess Kaoru Nakamaru, Chair of the International Affairs Institute for World Peace, royal family liaison to the leadership of North Korea, and Donald Trump’s biggest fan in Japan. I was very glad to bring back to the West information about the bargain between General Secretary Xi Jinping, President Donald Trump, and the leadership of the two Koreas, to unify the Koreas, with China agreeing to control “loose nukes” and the USA agreeing to withdraw US military forces once the Koreas were unified and clearly stabilized.

A month later (this month) Gareth Porter, one of the only honest journalists reporting the truth on Iran, Korea, and Syria, the top three Deep State targets for subversion and war profiteering, reported what was being said in the South Korean press and being deliberately, maliciously ignored by the Western press: that the Supreme Leader of North Korea, Kim Jong-un, has explicitly agreed to the denuclearization of North Korea.

It is in that context that I report – with the kind permission of Princess Nakamaru – her telephone call to me this morning to discuss the significance of the recent visit of Kim Jong-un to China, and more particularly, the significance of the esteemed manner in which Supreme Leader Kim Jong-un was received by General Secretary Xi Jinping. There were two key points made: