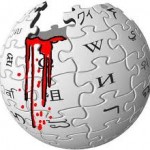 Medical Despotism, the AMA’s and Wikipedia’s Offensive Against Chiropractic

“Chiropractic is a form of alternative medicine mostly concerned with the diagnosis and treatment of mechanical disorders of the musculoskeletal system, especially the spine. Proponents claim that such disorders affect general health via the nervous system , claims which are demonstrably false…. Its foundation is at odds with mainstream medicine, and chiropractic
is sustained by pseudoscientific ideas such as subluxation and “innate intelligence” that reject science.” – Wikipedia